This is mark Joseph “young” blog entry #62, on the subject of Gender Issues and Seating Arrangements.

A lawsuit has been filed against Israel’s El Al airline, alledging discrimination in relation to seating accommodation:  the airline asked a woman to move to a different seat to accommodate the religious considerations of an ultra-orthodox man seated beside her.  Apparently this happens sometimes.

I once read an interview with Freeman Dyson.  (I think it was him; I also read an interview with Gerard K. O’Neill, and I sometimes get some of the trivia confused.)  The interviewer asked him whether growing up he ever wondered why he was so smart.  He responded no, not exactly–or at least that’s not the way the question came to him.  What he wondered was why everyone else was so stupid.

I did not have that experience.  However, I am often surprised that things which seem obvious to me are completely obscure to other people.  I’m sure that’s a common perception of opinionated people–I know some opinionated people who don’t understand why other people disagree with them and conclude that those people are not intelligent, which is only sometimes true and rarely the reason.  I, though, am not talking about people disagreeing with my opinion; that happens all the time, and I have great respect for many people whose opinions are very different from mine, and find great value in discussing our disagreements.  Much is learned through this, even when neither of us change our views.  What I mean is that sometimes problems have what to me are obvious solutions, and yet the people for whom these are problems fail to recognize the solutions even after the problems become serious–like the present lawsuit, which El Al had to know would happen eventually.

So let’s look at the story. 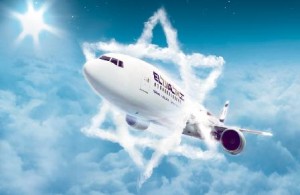 The story is that Renee Rabinowitz was flying from New York to Jerusalem on El Al.  Rabinowitz is a Jewish woman, a NAZI Holocaust survivor, eighty-one years old.  She was seated beside a Jewish man.  The man, however, objected.  He was of one of Israel’s “ultra-orthodox” denominations (“sects” is such a biased word).  The Torah is understood to forbid any contact at all between any man and any woman not related to each other, even if that contact is accidental.  The man asked that the woman be moved to accommodate his religious beliefs.  The stewardess asked–Rabinowitz says pressured–her to change seats.

It is obviously a problem.  If the Israeli national airline, whose advertising says that they “are Israel”, is unable to accommodate the religious scruples of those Israelis who most strongly uphold the historic traditions of the national faith which long defined them as a people, how can anyone expect to have their religion respected in the wider world of commerce?  To hope that on a transatlantic flight adjacent seatmates would never accidently touch each other–it certainly defies the odds.  El Al is right to attempt to accommodate the request, and there is a sense in which the man is within his rights to make it.  Yet the situation is so riddled with problems that have obvious solutions that the outcome here should never have happened.

First, this apparently is not the first time El Al staff have asked women to move to accommodate the religious scruples of men, and there is no indication that they have ever asked men to move to accommodate the religious scruples of women.  The Israel Religious Action Center (a liberal advocacy group) was waiting for the right case for a lawsuit, which suggests that this has happened before, to the point that it at least implies a policy.  The lawsuit is certainly going to claim that the airline was aware of the potential problem.  That raises the first obvious solution:  why did the airline not ask passengers whether they had this specific concern?  Airlines ask whether you want first class, business class, or coach, often whether you want a window or an aisle seat, whether you have any specific dietary restrictions.  How much trouble would it be to include whether each passenger is male or female, and whether he or she has a religious objection to sitting next to someone of the opposite sex?  Not every airline in the world would, could, or should do that, but certainly El Al should already have been doing it, since they have already had the problem.  This simple policy would eliminate at least most of the complaints in this area.

But more directly, as it will undoubtedly happen again, the stewardess certainly handled the matter inappropriately, and so did the male passenger.  The way to accommodate a religious problem of this sort is to move the person who has the problem.  If I am seated next to someone who so reeks of smoke that it is aggravating my asthma, I seek to move; I don’t expect him to be incommoded for my problem.  The man certainly had a right to have his religious concerns respected, and on that basis to have the stewardess seek a more acceptable seat for him.  He did not have the right to inconvenience a fellow passenger who was a stranger on the basis of his religious liberty.

As I say, the solutions seem obvious to me.  I can only wonder why no one recognized them before the problem became a lawsuit.