This is mark Joseph “young” blog entry #429, on the subject of Luther College of the Bible and Liberal Arts.

In Teaneck, New Jersey, at the corner of River Road and Pomander Walk, there is a somewhat elegant retirement home.  It occupies the grounds formerly utilized by a small religious junior college, Luther College of the Bible and Liberal Arts, no longer there. 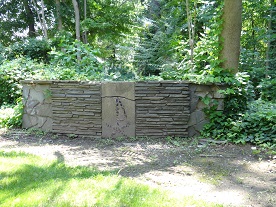 I attended that school when it had existed, under perhaps several different names, for a quarter of a century, and now participate in an unofficial alumni group on Facebook.  Periodically someone will post to the list asking what remains of the campus, and whether anyone might post a sign memorializing the location.  It was, after all, for many of these students a place of great significance, holy ground if not literally at least in function in their lives.  The answer has been the same for a number of years, that if you know where it was there is a grove of trees within which once stood an outdoor chapel, and the mortared stone “altar” of that chapel still stands, or apparently did last time anyone sought it.

To the students, that seems an inadequate testament to the great things which once happened there.  It was a turning point in many lives, a foundation for many ministries, a first meeting place for many important relationships.  Because of the timing in which it entered our lives and the Biblical principles it brought to us, it cannot have been less than that.  Yet there is nothing there.

There are memories, of course.  I can still see the buildings that once stood there–a chapel with classrooms, a dormitory, and several repurposed residential buildings which provided offices, cafeteria, library, rec center, and more student housing.  It was ever a small school, with one teacher for every dozen of the fewer than two hundred students, and the unofficial slogan, “At Luther, you’re not a number, you’re a rumor.”  It was not a place to be anonymous.

It has by now been gone longer than it had been there.  Periodically someone goes through the mad search to locate whatever institution currently maintains the school’s records and transcripts.

Hope for some kind of sign or marker is probably faint.  I doubt the school, shadowed as it was by the rather large Farleigh Dickenson University campus a block away, was ever of any significance to the people of Teaneck.  The Lutheran denominations which cooperatively supported it then have all by now merged and morphed into new ones.  It is ultimately only the alumni, those touched by its presence in the past, who remember it or care that it was ever there.

But then, the location is not important.

The legacy of Luther College is not the dirt on which it was built.  It is the lives of those who attended.  You whose faith was formed and informed by the teachers and other students in your time there, you who have carried that faith into the world and into the lives of others, you are the legacy of Luther College, the only part of what remains that ever mattered; and as that faith impacts others, that legacy spreads, the unimportant name of the place lost but the faith it engendered and nurtured growing and spreading.

6 thoughts on “#429: Luther College of the Bible and Liberal Arts”