This is mark Joseph “young” blog entry #413, on the subject of The Abomination of Desolation.

I received a question by private message.  I prefer to answer questions publicly, partly so that more can benefit and partly so I don’t have to answer them again, so I am copying it here:

Have another biblical question for you.  What is the desolating sacrilege?  I have always been puzzled by this verse in Mark.  Is it in fact referring to the destruction of the Temple and the fall of Jerusalem at the hands of the Romans? 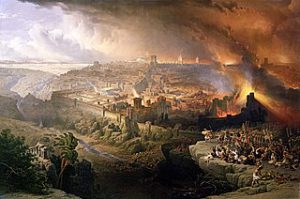 It should be said that there are interpreters who believe that it in fact refers to events still in the future, and that is not impossible.  However, there are at least three reasons to believe that it is about the destruction of the city in the first century.

The reference appears in Mark 13:14, and is paralleled rather closely in Matthew 24:15, and particularly the words my questioner cites as “desolating sacrilege” which is usually referenced as “the abomination of desolation”.  Looking at the context, in Mark 13:1 the disciples comment on the grandeur of the temple, and in the next verse Jesus declares that the entire structure is going to be totally demolished.  Two verses later the disciples ask when that is going to happen, and Jesus launches into a teaching which we think is about the end of the world but which if it is answering the question that was asked and not the question that the disciples thought they were asking is actually about the destruction of the temple.  The same sequence happens in Matthew 24:1ff.  Thus when we get to the abomination of desolation, it logically is still about that destruction.  Titus and the Roman Legions wrought that kind of devastation in 70 A.D., and so the prediction is consistent with that event.

We have the same circumstance launching the same question and the same teaching in Luke 21:5ff, and that gives us our second reason.  Following all three accounts, they go through the same pattern up to the statement that the one who endures will be saved, in Mark 13:13, Matthew 24:13, and Luke 21:19, and in Matthew and Mark the next verse is the one in question here.  However, in Luke 21:20 the following text translates (my translation) to “Yet when you see encircling Jerusalem by armies, then know that her devastation is impending”, and the next verses in all three accounts tell us to flee to the mountains.  It thus seems that Luke has replaced “abomination of desolation” with “Jerusalem besieged”–but Luke fairly commonly replaces phrases that would have particular meaning to a Jewish audience with words expressing the same concept to those in the greater Greco-Roman world.  Thus if we honor Luke’s understanding, what Mark and Matthew called “the abomination of desolation” was understood to refer to the siege of Jerusalem, which again fits the events of A.D. 70.  Some will say no, Luke is talking about something else, but since in the next verse he is back on track with the others either we have to say that Luke’s Gospel is in error here, or Luke has provided us with the correct meaning of that phrase.

What might be most telling, though, is that next part, where all three Gospels tell us to flee from Jerusalem.  The problem is that once the city is surrounded, it’s too late to escape.  However, history tells us that Titus brought his legions to Jerusalem and surrounded it, but then was called to withdraw due to a different problem, leaving the city for a brief period, then returning and finishing the job.  It was probably the case that devout but unbelieving Jews in Jerusalem believed that the withdrawal of Titus was the hand of God saving them, but Christians had this prophecy and so would have known to leave.

It might be suggested that a similar siege will occur in the future, but warfare has changed since then and such a siege is unlikely as a military strategy in the modern world.  The circumstances seem to be very particular to that event, and thus we should probably understand Jesus as predicting the first century destruction of Jerusalem.

As a footnote, we don’t have much in the way of historic confirmation of the fact that the Christians did leave Jerusalem at that time, and the suggestion has been made from that that Luke interpreted the statement after the fact to make it fit the events.  However, C. S. Lewis has somewhere noted that this is irrelevant.  By the end of the century the book was certainly in circulation, so either Christians did exit the city or they had to explain why having been warned in advance they had failed to do so, and on a naturalist viewpoint Luke would have been very foolish to include a prophetic command that had not been followed.  Therefore Luke is either providing the warning in advance or explaining after the fact why it was that Christians knew to flee the city at that time.  Either way, the pre-existence of the prediction (before the event) is confirmed.

I hope that helps.