I must admit that the primary snuck up on me this year–it’s today, June 8th, 2021, and I only discovered this last night.  So I have rushed through a bit of research to get this for you.  We are electing a governor this year; that’s not all we’re electing, but that’s the big deal. 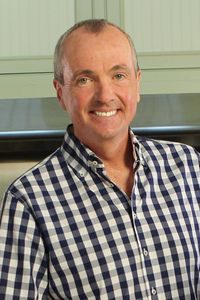 On the Democratic side, Governor Phil Murphy (pictured) is not exactly running unopposed.  Although his is the only name on the ballot, Lisa McCormick is formally listed as a write-in candidate.  Her name was struck from the ballot due to evidence that some of the signatures on her nominating petition were fraudulent.

On the Republican ballot, there are four contenders, but the leading percentage of voters as of yesterday had 38% undecided.  Otherwise, Jack Ciattarelli holds the lead with 29% of the voters in most recent polls and all the major endorsements.  He has served in the State Assembly, started two successful businesses, has an M.B.A. from Seton Hall, and owns a publishing company.  He recognizes Trump as the legitimate standard bearer of the party until a new leader is elected even though Biden won the 2020 election.  He promises economic improvement for the state.

Some distance behind him, at 23% of the vote, is Hirsh Singh, an avid Trump supporter who believes the 2020 election was fraudulent.  Singh is an engineer with a bachelor’s degree covering engineering science, biomedical engineering, and material science, with experience in the fields of missile defense, satellite navigation, and aviation security.  He has no political experience.

Philip Rizzo is third with 8% of the vote in the polls.  His bachelors from Villanova is in business management, he has held no previous political office, but he has worked in real estate and construction and served as a pastor.  He met with Trump in May at Mar-a-Lago, and compared his campaign to Trump’s 2016 run.

Finally, polling at 2%, is Brian Levine.  Former Mayor of Franklin Township and Somerset County Freeholder, his bachelors degree is in economics, from Rutgers, and he is a C.P.A.  He is running a grassroots campaign.  He says he supports some of Trump’s policies, but that the party needs to take its eyes off Trump and put them on economic issues.

In addition to the governor’s race, both New Jersey legislative houses are up for complete replacement.  Most of these races, though, are uncontested at the primary level, and those that are contested would take too much space and address too few readers to be worth covering here (we have forty districts).

I shall endeavor to provide additional information once the primary dust settles and we know who the candidates are for the November election.