This is mark Joseph “young” blog entry #39, on the subject of Character Futures.

This picks up from there.  Our three characters are each in various ways preparing for something in the future in these chapters. 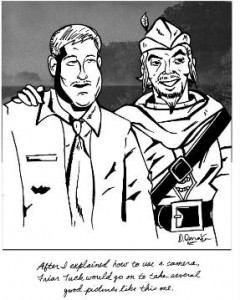 I had begun seriously toying with the idea that Slade might marry Shella, but at this point I was also seriously planning the end of my book, and Shella did not fit where I was headed.  Still, it seemed natural to draw them closer together.

The notion of Torrence becoming Lord of Slade Manor had developed gradually, and was well-formed when I had the letter sent at the end of the previous chapter.  Shella’s place was still nebulous.

I wanted to bring across the idea that having control over your own destiny is a very modern concept, that even for the sons of noblemen in the past everyone fell into his assigned place in the world and did what his parents left him to do.  Torelle can’t see it any other way.

As Slade begins talking to Torrence, he wants to say that Torelle ought to have mentioned this earlier but is too stubborn in his conception of life to have done so, but he doesn’t want to offend Torelle in the process, so he looks for a reason why it falls to him, now, to do so.

I needed a lunar eclipse, because the concepts of the werewolf I was using included that they were nearly invulnerable under that condition.  In play, if I recall correctly, Ed simply rolled the dice and announced that there was such an eclipse coming up on a particular date.  I could have done something similar, but I wanted a bit more of a connection to reality—besides, I had played this in about 1993 and was writing in 1997, so just as he had put me a few years in my future I put Lauren a few years in hers, and had her already past the date of the eclipse from the game.  So I checked an almanac.  There was an eclipse coming on October 17th, which in story terms was very short, as I had been tracking dates and trying to keep consistent with the seasons in the climate and could not easily shift everything (not impossible for Lauren to wear a parka in September, but not at all reasonable in August).  It happened that the eclipse would not be total in Philadelphia, but I figured that to be a very small change, and noticed that it would be quite a few years before there would be another eclipse at all, and I could not stretch Lauren’s story that far.  I also felt that the rush gave it a sense of realism, because when you are trying to align actions with astronomical events you sometimes find yourself under pressure.

In play, some of the ideas put forward in the book by Father James came from the player behind his character, Tim Pangburn’s Father Holer, including the banquet, radio jammers, and the tampering with fire boxes and false alarms.  I had conceived of the Mission On the Move (it was the State Street Mission in game, I think, but I liked St. George better, and was not at all certain how much Ed had plagiarized), but I didn’t use it until the third raid, the destruction of a theatre called The Presemium.  I had already decided that Lauren’s story had run long enough, and I was going to eliminate everything I did after that point, in part because some of it was very much off the central story and involved another player character, and in part because I had still been in that world when Ed stopped running the game, and I thought the confrontation with Horta would be a good way to end it.

I also conceived the notion of blessing water in the pumper trucks, but that, too, was done at the Presemium raid; I liked the idea too much to abandon it, so I brought it into the story here.

I was toying with the notion that Horta might be an antediluvian (pre-flood) vampire at this point, and put the notion forward with Annuda.  Werewolves are not so long lived, perhaps comparable to humans, and their history is all oral tradition, so it wasn’t etched in stone just because she said it might be so.  Since Lauren killed Horta, and I was planning to take her to earlier points in the history of this world, I realized while writing the next book that I was going to need someone more powerful than Horta who was going to have to be the villain in the final encounter in the third book.  Thus the destruction of Horta led to the conclusion that Tubrok, not Horta, was the antediluvian.

When I run Sherwood as a game, Richard does not return unless the player finds a way to return him; the novel more closely follows the history, in which the merchants ransom their king.  John really did not have the money—Richard and their father had heavily taxed the land to pay for their wars, leaving little in the royal coffers.  It is also the case that upon his safe return, Richard reneged on the deal he had made with France to remove the impediment to his leadership of the Crusade, and crossed the channel to do battle over the ownership of Normandy, Brittany, and D’Anjou.

The connection between the Prince John who ruled as surrogate for Richard and the King John who was forced to sign the Magna Carta is not generally made.  I had never made it until I researched the history for this world, and even now I cannot put a year on it beyond that it was near the end of the first decade of the twelve hundreds.  I figured Kondor wouldn’t know, either.

Quite frankly, I had no idea that Slade would eventually marry Shella.  It was one of those things, that I thought they were attracted to each other but that he would always consider it impossible and she would never push the issue, and so he would verse out and leave her behind.  So I was playing with their mutual attraction while keeping the boundaries clear.

The communications spell was one of those things I thought might be useful at some point in the future, but was done more to give the impression that Slade was learning magic, at least a bit.

I also found myself building a friendship between Slade and Filp.  It, too, was expected to end when Slade left, but I found that much of it lingered with Slade as he visited other worlds.

When I began Slade’s dungeon crawl I thought he would probably be killed somewhere early in the game; I had not anticipated making him a lord and keeping him there for decades.  I realized that I had painted myself into a corner, as there weren’t too many ways to remove him that would be consistent with his character, but I also saw some advantage in having the story go this way, so I wasn’t too worried.

My editor was not a religious man, and he found Lauren’s affront at the competing religion to be irrational.  I had to do some extensive rewriting here to make it clear why the religion Gavin espoused was dangerous.

Throwing a “spanner in the works” is probably a distinctly British version of that concept; I had always heard it as a “monkey wrench”.  The latter is a vernacular name for a pipe wrench, which I assume the former also is; I got it from a Doctor Who episode long ago and liked the word at least for that expression.

“We Shall Overcome” has long struck me as a peculiar song.  I learned it at church camp, and it comes across as one of those contemporary Christian songs of the early sixties, like Kumbaya or They’ll Know We Are Christians By Our Love, but it lacks any specifically Christian thematic elements.  Thus I thought it would work for a religion that was imitating Christian ritual.

Lauren’s speech and actions are calculated to incorporate as much supernaturalism as possible into what should come across as very natural and ordinary, as if magic and vampires were things everyone encountered on a daily basis.  It was part of the psychological attack on their faithlessness.

Kondor’s uncertainty concerning what to do next reflected my own.  I was not eager to attempt to create a tour of early thirteenth century England, and I really had done most of what I could do with Kondor as founder of modern medicine.  I was also faced with the problem of how to remove him from the present world, since if arrested he would logically face a trial, a rather drawn out and not terribly interesting part of the story.  So I looked for a shortcut, and managed to find one.

Sir Guy’s accent is different, of course, because he is high-born Norman, whereas all the commoners and recruits of the shire reeve are Saxon.

I have often wondered whether to return Kondor to a future version of the world he formed here.  I do that with players in this world, particularly if they kill or otherwise depose Prince John and so prevent the signing of Magna Carta.  Joe took no interest in politics here, ultimately (despite his initial interest), so he did not change that—but he did change their medical science drastically.  I chose to bring him back to a future version of his next world, though, and if I ever do it with this world it will be far enough removed from the present to give it distance.

I have always been fond of the opening of Quest for the Vorgo, in which the verser arrives on the table on the dais during the ceremony to summon a supernatural deliverer.  No one has ever been able to answer whether the magic brought him there, or whether it was something else.