This is mark Joseph “young” blog entry #348, on the subject of Temporal Thoughts on A.R.Q..

This was running on Netflix, and it appeared to have a time travel element, so I put it on my list of movies to watch and possibly analyze.  The blurb, though, suggested it was yet another Groundhog Day clone, people caught in a time loop, and as temporal anomalies go time loops are pretty boring.  However, a time travel fan sent me a Messenger message suggesting that it was worth watching, so I grabbed my pad and pen and started watching.  My notes cover maybe the first half of the movie before I gave up on them. 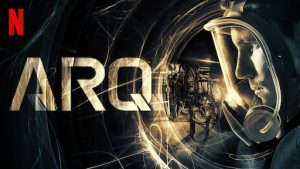 For what it’s worth, it’s a decent action film with quite a few twists; this is not a full analysis and I have attempted to keep the reveals minimal.  I immediately recognized lead figure Robbie Amell as Renton from his role in When We First Met where he played heartthrob Ethan; he was also Stephen Jameson in The Tomorrow People and Ronnie Raymond in The Flash, so by now he was a familiar face to sci-fi/fantasy fans.  The action begins immediately, as Renton awakens to see that the clock says 6:16, the girl whose name we eventually learn is Hannah is sleeping next to him, and suddenly the door bursts open and masked men come through, grab Renton and drag him out, there is a scuffle in which Renton falls down the stairs and hits his head, and he awakens back in bed at 6:16 with Hannah lying beside him.

Unlike Groundhog Day, more like 12:01, we gradually learn why time is looping.  It has something to do with the Arcing Recursive Quine, A.R.Q., which is usually referenced as the Ark or Arc.  Working for a massive corporation called Torus, Renton, an engineer, invented something he thinks is a perpetual motion machine that produces excess power.  For what it’s worth, I conceived of the same device when I was in junior high, and when my father pointed out that that was what I had described it was obvious that it wouldn’t work.  His doesn’t actually work, either, but he doesn’t know it yet, and neither does Torus, who wants it back.  Torus is engaged in something called the Energy Wars, their chief adversary being The Bloc.  Renton has it up and running in his garage, monitored by a multi-screen computer system.  He booby-trapped it with an electric charge, and at 6:16 in the morning a member of the team that had come to find it touched it, was killed by the electrical charge, and created the front end of the time loop.

The machine has a motor driven by batteries which are recharged by a generator turned by the motor.  It’s probably not as simple as that, but they figure out that the loop resets at 9:25 because for some reason the batteries fail.  They know that the loop resets consistently at 9:25 because for some reason which the movie ignores the computer is recording the activity of the machine as it goes through every loop, showing that it runs from 6:16 to 9:25 and then again runs from 6:16 to 9:25, repeatedly.  Why the computer’s memory is not erased when everyone else’s is (and the computer remembers more iterations than Renton) is not addressed.  Further, it appears that the loop has been happening thousands of times, so it is remarkable that the computer’s memory has not overflowed.  Presumably eventually it will.

The second time we see that it is 6:16, Renton is the only one aware of it.  He goes through the beginning of the day several times, each time learning more including the first big twist, and each time being killed one way or another, usually shot.  Then suddenly, and perhaps not entirely inexplicably, Hannah awakens aware of what had happened in the previous iteration–only the one, but from that point forward she is aware of each repeat of the loop.  That means that the two of them are now working to make it different, as they uncover additional twists.

Renton and Hannah are arguing about what they need to do, as Hannah wants to give the machine to the Bloc so they have a chance to defeat Torus, and Renton wants to take the machine and run, or barring that to destroy it so that no one will have it.  Their options become more limited when someone they have identified as a Torus mercenary infiltrator (plot twist) in the team becomes the third person aware of the loop.  Now three people are trying to change events as the loop unfolds, each aware of what happened in some of the previous loops.

We are ultimately told that the loop is localized to the house, but we don’t learn from that what’s happening in the rest of the world.  In fact, in the early iterations we hear the same television broadcast several times, so we don’t know whether somehow time outside has frozen and the broadcast repeats because it played in the first iteration, or whether the idea that the loop is spatially limited is wrong and the broadcast is repeating, or whether something else has happened out there.  In several of the iterations the villain calls in a strike team from the company, and in at least one, probably more than one, it arrives, so time within and outside the circle must be connected.

There is a problem that in one of the later loops Renton and Hannah discover a recording they sent to themselves that they do not remember having made, which they later do make to send to themselves.  This is inconsistent with the temporal loop scenario unless they made it in an earlier iteration that they don’t remember, and the content of the message really could only have come from their memories of the loop.

Both sides develop the interesting strategy of escaping a losing situation by permitting themselves to be killed so that when the time expires they will get another try at it.  They reach the conclusion that if they turn off the machine time will continue past 9:25, but only Renton knows how to turn off the machine.

The film ends with another unexplained temporal twist, and the loop continues reminiscent of Triangle.

It is indeed a compelling action movie with several excellent plot twists, and despite the fact that the morning is repeating the viewer rarely knows what will happen next.  I wouldn’t recommend it for the time travel elements, but it’s an enjoyable film well done overall.