This is mark Joseph “young” blog entry #336, on the subject of Time Trap Temporal Thoughts.

I was looking for a good time travel movie to analyze, and Netflix started pushing this one, so I watched it. 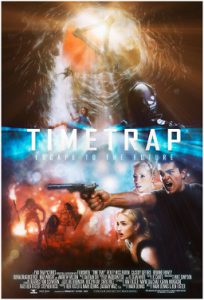 It also had a few problems.

I suppose it really begins in the stone age, because we learn probably fairly early that some stone age humans inhabit the cave.  Our temporal instability is inside this cave, but we’ll get to that.  The stone age ended sometime between four thousand and eleven thousand years ago, depending on who you ask, but that probably does not make much difference here.

It will readily be apparent to any time travel fan that the flashing light at the cave exit indicates time passing very rapidly on the outside.  I was surprised at how long it took our seemingly intelligent spelunkers to reach that conclusion, but then, the viewer has the advantage of knowing that this is a time travel story.  What was more difficult was someone’s suggestion that the flashes were not days but the passing of the equinox when the sun was directly overhead.

Clever idea, but the caves are supposed to be in Texas.  On the equinox the sun is directly overhead at the equator.  In fact, it is never directly overhead anywhere in the continental United States but for the southernmost tip of Florida; it “moves” between the Tropic of Cancer and the Tropic of Capricorn, and so is only overhead in points within what we call the Tropics, and even there dependent on the day of the year, twice a year but for the end points themselves, once each on the appropriate solstice.

This is not impossible to resolve, however.  We only need to assume that the entrance to the cave is not perpendicular to the ground but set at a southerly angle such that twice or possibly once a year the sun passes in a direct line from it.  The sun is never directly above Stonehenge, but it frequently aligns with various stones such that light and shadows appear in specific places.  The perhaps more difficult point is that for how fast time appears to be moving, the flicker of light that enters the cave would exist for a shorter period than that of a stroboscopic camera flash.  On the other hand, the alignment need not be perfect, so we would have this flicker at least several days in a row, and while we wouldn’t quite get what we see we would get brief periodic flashes of a brighter light disrupting the ordinary day/night flicker that is too fast for the eye, much like the one hundred twenty cycle per second flicker of an incandescent light bulb.

That raises the question of how fast time is moving on the other side of the barrier.  It is not a simple question.  For one thing, even with a stopwatch it would be difficult to determine how many flashes per second we are seeing.  On top of that, as just suggested, we don’t know whether we are seeing one flash per year or two.  However, we can put boundaries on it.

If we are seeing one flash per second and two flashes per year, then time is advancing at one year every two seconds.  At that rate we move thirty years per minute, and in an hour we will have advanced one hundred eighty years.  That actually could be enough time for humanity to have moved to Mars.  It probably could not be enough time for humanity to have completely lost the English language as we know it, grown to eight feet tall, and evolved very different hand structures and respiratory requirements without genetic manipulation.  (Were you to meet someone from the early nineteenth century, they might be a couple inches shorter on average and their accent would have been funny, but you could communicate adequately–and you don’t have the advantage of entertaining recordings of how they spoke.)

The problem is in the other direction:  in order for the cave men to be alive in the cave, at least four thousand years must have passed outside.  If we are seeing five flashes per second and one flash per year, five years per second is three hundred years per minute, eighteen thousand years per hour.  That would easily make it possible for the cavemen to have arrived three and a half hours ago, and we could assume they arrived as long as half a day ago, still getting their bearings and surprised by these people from the future.  However, at that rate the day after the professor vanished would be only a fraction of a second for him, and his parents could not have been in the cave as long as a few minutes.  The cowboy the professor sees just ahead of him would have had very little head start, particularly since he must have entered after the parents despite the appearance of a nineteenth century gunslinger.

We could probably work out a rate that is between these two extremes which allows for this.  The difficult question is how long the cavemen could have survived, in terms of days, without food.  Yet there is a potential answer to that.  Within the cave there is another temporal distortion beyond which can be seen persons from previous centuries as seemingly frozen from the perspective of the outer cave area as the outer cave area is from the outside.  That section does not have the same problem as this section:  one does not need a rope to enter, nor to exit, and so it is possible that some of the cavemen had moved from the outer area to the inner area, stayed a short time, and came back.  In the few hours they were beyond the barrier thousands of years would pass.  That means that others still beyond that inner barrier might at some time in the future be rescued, if the rescuers remain watchful for thousands of years.  Even with futuristic alienistic humanity, that doesn’t seem particularly likely.  Larry Niven was sharp enough to recognize that when his future society sent ram ships to explore distant stars traveling at near-light speeds, their pilots would return to a humanity thousands of years future of their departure time, and so to a completely different society.  Anyone who spends as much as half an hour inside the outer cave would return to a very different world beyond.

Which brings us to The Rescue.

The first odd aspect of the rescue is the ladder.  It is presumably made of some futuristic material that would withstand the anticipated stresses, but there are still some significant points.  Whatever is at the top of the ladder has to be stable, unmoving relative to the interior of the cave.  Yet the air and the dirt and even the continent itself are moving, and those motions are going to impact any object fixed above the cave by any means.  We can minimize such movement, but over the course of a day there would be tiny shifts for which the system would have to compensate, and those shifts would create vibrations in the ladder.  They might be too high to hear, but someone touching the ladder should be able to feel a tingle from it.  We don’t know that they didn’t, of course, but it wasn’t noted.  Further, if the ladder is touching the floor, it’s going to wear a hole in the floor fairly quickly from those vibrations.

It was, however, the suited man himself which bothers me.  He descends the ladder and then does not explore the cave but rather walks directly to the pool of water to bring back a sample.  Further, not only does he know where this water is located, he knows that it has healing properties, because he puts the injured person in it to bring about his recovery.  Where does he get his information?  If someone had previously entered and mapped the cave that accurately and reported the quality of the water, and successfully exited again, it would have to have happened before the parents entered or the parents would have been rescued in the process.  Such an exploration could not have happened in the centuries following the professor’s entrance because between the professor and the students someone would have seen an explorer.  We might plausibly suggest that something like ground radar or sonar was used to plot the caves, which might even have revealed the position of water sources within them, but it would not have told them anything about the water there.  The actions of the suited man do not make sense, in the sense that there is no plausible basis for his apparent knowledge.

Of course, also, his brief visit to the cave involves many years passing on the outside.  He uses up his time, presumably the life support in his suit, and it is unlikely that such a suit would be functional for less than an hour.  As we noted, that would be minimally one hundred eighty years, and probably considerably longer.  It’s quite a project, although if we assume successful life extension technology it might be the equivalent of a quarter century of our lifetimes.  That’s still a very long mission.

The tentacles have a similar but more complicated problem to the ladder.  They have to have their control circuits in the tips so they can function on the temporally slowed side.  Further, it is difficult to imagine a mechanism that would permit them to function on both sides of the time barrier without stressing themselves at the point of crossing.  Of course, they don’t have to work for long on the slowed side, but the minute or so that they are snatching the people is again several years that they are extended.  When the second group reaches the ship, the first girl rescued should look considerably older.

These are really all minor quibbles, and perhaps there are aspects we don’t know.  If the ship is equipped with a system that lets it do what the cave does, and so matches its time flow to that below, it resolves some of these problems.  If the life extension technology can be applied to a girl around twenty effectively, she might well have stopped aging in the years before the others were rescued minutes later.  I will always be bothered by the acts of the future explorer, because I don’t see any way to reconcile his knowledge to the events prior to his arrival.

I tried to watch it a second time and could not persuade myself to do so, so it is possible I missed something significant, but hopefully this is adequate for the purpose.