This is mark Joseph “young” blog entry #261, on the subject of A Small Victory for Pro-Life Advocates.

The United States Supreme Court has ruled in National Institute of Family and Life Advocates v. Becerra 585 U. S. ____ (2018), in favor of pro-life Crisis Pregnancy Centers who, under the California Reproductive Freedom, Accountability, Comprehensive Care, and Transparency Act (FACT Act), were required to communicate to their clients that the State of California was ready to assist them in obtaining abortions. 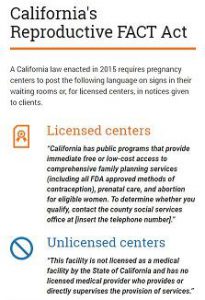 It should be understood up front that the Court did not actually rule that the FACT Act was unconstitutional.  That was technically not what was on appeal.  The National Institute for Family and Life Advocates, NIFLA, had raised a challenge to the law and requested an injunction preventing its enforcement while the case was being heard.  The lower courts ruled that NIFLA probably could not win and so was not entitled to an injunction; the Supreme Court granted the injunction, stating that NIFLA probably could win on the merits and so enforcement should be stayed until the case had been heard.

Justice Thomas wrote the opinion of the court, joined by Chief Justice Roberts and Justices Kennedy, Alito, and Gorsuch.  He observed that the law appeared to be targeted specifically at clinics and similar services which focused on alternatives to abortion and attempted to encourage women to give birth to their babies, often providing prenatal and post-natal care for such mothers.  Clinics run by licensed professionals or run under a state license were required to deliver a notice consisting, in English, of forty-two words (one hyphenated) plus a phone number (top notice in the picture), informing clients that the State of California was ready to help them kill their unborn babies if they so wished.  This notice had to be prominently posted in large letters within the facility, included as a full-sized document with any papers given to clients, and included in any advertising.  Further, this notice had to be delivered in every language recognized by the local county as a major spoken language within the county–at least English and Spanish, and in Los Angeles County thirteen distinct languages.

Thomas observed that this was requiring an organization whose very purpose was to reduce the number of abortions to communicate the reverse message, that abortions were readily available elsewhere.  He further observed that this was a controversial message, and that the weight of the requirement was excessive–if such a licensed organization decided to post a billboard in Los Angeles County that said “Choose Life” with a phone number, that billboard would also have to have that forty-two word notice in thirteen languages in the same sized print as the core message, overwhelming the intended message with what amounts to paid advertising for their competition.

It would be something like requiring all politicians of any party to include in their paid advertising equal space promoting each other candidate in the same race.

Facilities serving the same purpose that were not licensed or run by licensed personnel were required similarly to post a shorter notice, again in all the same ways and places, stating that California has not licensed them as medical care providers.  Again, it was to be posted prominently, included in all advertising, and given to clients in printed form.  Further, the legislation was worded such that the requirement would only apply to pro-life organizations.

So egregious was this animosity toward pro-life organizations that Justice Kennedy wrote a concurring opinion, joined by Chief Justice Roberts and Justices Alito and Gorsuch, attacking the “viewpoint bias” of the law.  The legislative history made it clear that legislators were attempting to force opponents of abortion to publish material contrary to their views.  He observed that the official history included a self-congratulatory statement that the Act was part of California’s legacy of “forward thinking”, and then wrote, 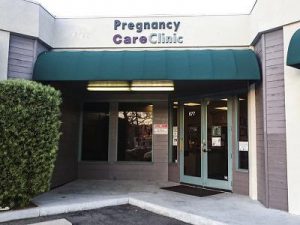 That amounts to religious/political discrimination, and again a violation of the First Amendment.

The fact is we regularly require organizations to post informational signs at least obliquely relevant to their purpose.  One example leaps to mind.  A few years back New Jersey had a problem, that several newborn babies were rescued from public trash cans because young parents did want them and could not care for them.  Today, all emergency rooms and many other care clinics have signs on the walls informing anyone who enters the building that there are safe drop points where you can abandon a child no questions asked.  Obviously that notice is irrelevant to the majority of clients in those facilities; just as obviously such locations are good choices for reaching persons who need that information.  We might debate whether such a program fosters teen-aged irresponsibility (a mother who would never dream of putting her baby in a trash bin might abandon it at a safe drop point if made aware of such, and so free herself of the task of caring for the child), but creating and promoting the option saves lives.  Other notifications are posted; the lawfully-required notices on tobacco products and in tobacco ads are clearly counter to the interests of tobacco companies.

However, Breyer attempts to sweep away the aspect that these laws were carefully tailored to target pro-life organizations.  He tells us that organizations that are not pro-life don’t need to be required to tell women about the availability of abortions, as they are probably already doing so.  That’s hardly a sufficient basis for a distinction regarding compelled speech.

For the moment, all that NIFLA has won is a delay, that the law cannot be enforced until the case has been heard.  However, the majority opinion and the significant concurrence are filled with good reasons for the law to be overturned, and as the case returns to the lower courts NIFLA has a good chance winning, probably without another Supreme Court intervention.

2 thoughts on “#261: A Small Victory for Pro-Life Advocates”