This is mark Joseph “young” blog entry #231, on the subject of Benefits of Free-Range Parenting.

I was completely stunned by an article reporting that Utah had passed a law protecting what is apparently called free-range parenting.  I posted it to my Facebook page and got some feedback which jarred a memory and got me thinking.  So here are some of those thoughts. 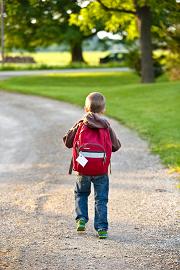 To clarify, “free-range parenting” means that children are not constantly monitored, but are given freedom to move about alone.  To view it from the negative, what the Utah law does is state that it is not criminal child neglect or abuse to permit a child to ride a bicycle to school, walk to a park unattended, or wait in a car while a parent runs into the store for a few things.  As one of my sons observed, his childhood would have been rather different had it been necessary for one of us to be watching him and his four brothers constantly.  I don’t think my mother could have raised the four of us and maintained the house if she had been required to be able to see us at all times–and I’m sure we never would have been able to play outside with other neighborhood kids, never mind play in the woods.

One of those commenting suggested that this requirement of constant monitoring (which, he asserted, is very real) causes children to stay home using their electronic devices to communicate instead of meeting in the real world, and is helping raise a generation of people who cannot make decisions for themselves.  That was the comment that jarred my memory, recalling for me another article on a very loosely related subject, about a study of primates.

I think the subjects were chimpanzees; they might have been a breed of monkeys.  What researchers observed about their charges is that there were two types of mothers.  One type paid very little attention to her children except when it was time to feed them, checking on them rather irregularly, just satisfying herself that they were somewhere nearby and not in danger.  The other type was constantly keeping the children near, in sight, within arm’s reach, becoming concerned as soon as the child vanished for a moment.

Following from this, they noted that as the children grew, those who were given freedom of movement became bold and assertive, willing to try new things and explore new places, while those who had been raised by protective mothers became cautious and restrained, risk-averse.  They became fearful, and in their turn became highly protective parents.

My first thought was that we want adults who are willing to explore, not afraid of the unknown.  Then I remembered another unrelated but useful bit of information.  It seems that the sensitivity of our gustatory sense (taste) does not follow a bell curve, as we might expect.  That is, most people do not have median powers of tasting with some better and some worse.  Rather, we have more of a horseshoe, that there is a group of people with highly superior gustation and a significantly larger group with very poor gustation, and almost no one in the middle.  The source from which I learned this stated that this was good from an evolutionary perspective, because in an environment in which most things are edible a species that is highly social and communicative needs only a few members who can identify food that is bad, and the rest of us can simply eat what they approve.

How is that relevant?

Another of the commenters noted that he would not want his children wandering free in the neighborhood in which he was raised, at least as it is today.  It is certainly the case that some of us live in rather dangerous places, while others live in relatively safe places.  Granted that no place is completely safe and no place completely unsafe, the survival of the species is enhanced by having some members willing to take risks and explore while others are more cautious and protective.  I know people who were kids on the streets of New York City and survived, who never really gave a thought to the notion that this was a dangerous place to live.  Not every kid makes it to adulthood no matter where he lives.  That some parents raise frightened cautious adults and some raise bold experimental ones is in that sense good for humanity.  I might prefer to see more bold experimental people, but we need the cautious ones, too.

The problem is that our society has been moving toward a place where the government itself is becoming too protective, and so raising frightened cautious citizens.  We attempt to coerce parents into being overly protective of their children, on the threat of sending them into foster care (which no one believes is safe).  As I mentioned in my original comments, the worst thing you can do to a family in New Jersey is make allegations to what is perhaps not inappropriately called Die Fuss, that is, DYFS, the Division of Youth and Family Services.  The intrusive investigations that follow from such allegations are always tinged with the threat that children might vanish into “the system” forever, giving them to paid child care workers in order to protect them from loving but not always fully capable parents.  As another commenter observed, parenting is mostly a guessing game in any generation.  We believe that our parents did some things right and some things wrong, and we attempt to do better, but also have to face public and official opinion concerning appropriate versus inappropriate childraising practices.

Utah has taken a positive step in the right direction here.  Let’s make it clear that parents who give their children more independence at a younger age are not being neglectful or abusive, but are helping them grow into responsible and courageous adults.  To do otherwise might be to deprive the next generation of the kind of people willing and able to lead us into the future.