This is mark Joseph “young” blog entry #222, on the subject of The Range War Explodes:  Interstate Water Rights.

Your ranch is upstream, and they dammed up the water.
Thirsty cows scream for my uncle to slaughter
The sheep
While your daddy’s asleep,
And I do the same for his daughter.

The Range War, by Todd Rundgren 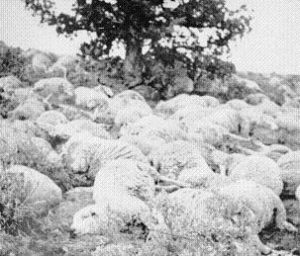 In my hopefully forthcoming book Why I Believe I used the example of the range war, probably recalled from this old Todd Rundgren Romeo and Juliet song, in asking whether or not it was “theft” for the owner of an upstream ranch to dam the water supplies to provide for his own livestock and family, if it reduces the amount of water that would otherwise naturally flow downstream onto his neighbor’s ranch to water his livestock.  It is a difficult and intriguing question:  can I steal something from you that you never had, simply by preventing it from reaching you?  If I prevent the water from flowing downstream, can you accuse me of theft?

It appears that the United States Supreme Court is going to answer that question:  Florida is suing Georgia for using too much fresh water from the rivers that supply its northern areas, and the court has granted certiorari.

Georgia has a pretty solid case.  After all, if a storm is coming and I get to the grocery store before you and buy the last of the milk, eggs, and bread (what is now being called a “French Toast Emergency”), did I thereby rob you of those supplies?  If you took me to court over that, you would probably be laughed out of the room.  It’s Georgia’s water; what they don’t use becomes Florida’s water; what they use to support their growing cities and their booming agriculture, they use.  It doesn’t seem that Florida can really claim that it’s their water before it reaches them, and if it never reaches them, it never becomes theirs.

On the other hand, it’s not like Florida can get to the water first by leaving earlier.  Florida is in a very real sense dependent on Georgia allowing the water to cross the border.  Further, these are serious environmental concerns, removing water from wilderness areas dependent on those rivers.

Since this is a dispute between two States, the Supreme Court has original jurisdiction–the case does not come to them on appeal from a lower court, and there are no prior decisions for them to consider.  An appointed Special Master has recommended that they side with Georgia, but at oral argument the justices reportedly seemed to be seeking a way to support Florida, Justice Ginsburg suggesting that a cap on Georgia’s water use might be necessary to protect its downstream neighbor.

Stay tuned for the resolution to this modern version of an old problem.