This is mark Joseph “young” blog entry #221, on the subject of Silence on the Lesbian Front.

Sometimes what the Supreme Court does not say is as significant at what it does say.  There is much speculation as to why they declined to hear a suit against a Mississippi law protecting a first amendment right not to support same sex weddings and similar matters.  The lower court ruling at this point is that the plaintiffs do not have standing, that is, none of them can demonstrate that the law has caused any of them actual harm, but the question behind that is why the court didn’t want to grab the case and decide the issue. 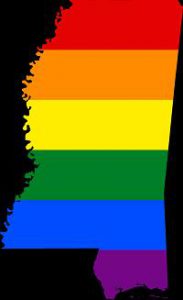 One possibility is that no one knows how it would fall, and no one wants to risk setting a precedent against their own view.  The conservatives would undoubtedly support the law, which makes it unlawful to bring any criminal or civil penalties against someone who for religious reasons refuses to provide services in support of acts they consider immoral, and particularly homosexual weddings.  The passage of the law invalidated local laws in Jackson and other metropolitan areas of the state that had protected the supposed rights of the homosexual couples.  Meanwhile, the liberal wing wants to normalize homosexual conduct, and have the law regard treatment of homosexuals as equivalent to treatment of blacks and women.  So we have an almost even split among the justices–but that there are an odd number of justices.

The swing vote is almost certainly Chief Justice Roberts.  He has been strong on first amendment rights, but has also sided in favor of homosexual rights.  If either side were sure of his vote, they would probably have accepted the case as a way of establishing a precedent favoring that position.  It thus may be that his position is uncertain, and neither side wants to take the risk.

On the other hand, the court has agreed to hear the cake case, in which a baker claims that a state law requiring him to make wedding cakes for homosexual weddings is an infringement on his religious liberty and freedom of speech.  The speech issue seems to be the one that is carrying the most weight with the justices, but it may be that the rejection of the Mississippi case is hinting out an outcome here.  If in the cake case it were decided that a state law could compel service providers to treat homosexual weddings the same as heterosexual weddings, it would still be an open question as to whether a state law can prevent any such compulsion, and the Mississippi case would matter.  However, if the Court were to decide that the baker cannot be compelled to create a cake for a homosexual wedding, that inherently supports the Mississippi law, saying that no one can be so compelled.