This is mark Joseph “young” blog entry #203, on the subject of Electoral College End Run.

A bad idea which we mentioned in passing some years ago is apparently gaining ground, thanks in large part to Hillary Clinton’s failed 2016 Presidential bid.

The idea, which we mentioned in Why We Have an Electoral College (in the page Coalition Government), is to nullify the original Constitutional intent, that the President be selected by the States as States, by having states pass a law assigning their electors to vote for whichever candidate wins the majority of the national popular vote.  Even some Democrats recognize that the current popularity of this idea is because the losing party are sore losers, and the fact that Hillary Clinton has added her voice to the chorus only underscores that sense–but as the map provided by the idea’s promoters shows, in green, eleven states have already passed the necessary legislation. 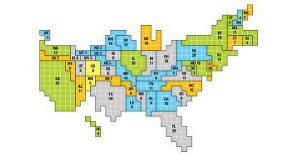 (In fairness to Hillary, sort of, she spoke out for the elimination of the Electoral College the last time the Democrats lost the Presidency in a close race.)

That legislation is designed to prevent states from being obligated until there is what they consider a consensus, that is, the legislation passed by each state specifically states that it becomes effective when, and only when, similar legislation is passed by states representing enough Electoral College votes to constitute a majority of the College, 270 votes, that is, one half of the 538 electors plus one.  At that point, whoever receives the majority of the national popular vote would, by dint of this legislation, receive at least two-hundred seventy votes and win the election.

There is a flaw in the reasoning.  Let us suppose that the total is not reached by 2020, and thus it does not impact the 2020 election; but it might be reached in 2021.  However, 2020 is a census year, and the primary reason the Constitution mandates that we have a census every ten years is to adjust the representation of each State in the House of Representatives.  Following the 2010 census New Jersey lost a seat, and there is every likelihood that some States will lose and others gain seats before 2024.  That matters because the number of electoral votes each state gets is determined by the sum of its Representatives plus its Senators, and it might well be that in 2021 the states having passed the law provide sufficient votes to cause it to be enacted, but by 2024 there would not be quite as many.  This might be unlikely, but it is not impossible–New Jersey, which has passed the law and has been shrinking proportionately, might lose another seat, and Texas and Florida, which have showed no interest in passing the law, have been growing and might gain another seat or two each.

However, that is not really the significant point here.

Some years ago a young liberal actress got in serious public relations trouble when she suggested carpet bombing all the conservative states in the central United States because they were impeding the progress that the liberals dominating the coastal states were pushing.  That is an extreme example, but the fact is that several of the big states are coastal states, and tend to be liberal–California, New York, Pennsylvania.  That means on some level we’re talking about the big states trying to take over.

California is an important example.  It tends to be liberal, but is short-changed in the Electoral College because it is short-changed in the House of Representatives:  there is a cap on the number of Representatives any state can have, and California’s population would give it quite a few more seats were it not for the cap.  Let’s face it, though:  California is a large piece of real estate with several very large population centers within it.  It could plausibly dictate law and policy for the entire country just by flexing its popular vote.

That, though, is exactly why the Constitution is designed the way it is.  When the big kids tell the little kids what to do, we call it bullying, and we look for ways to punish and control it.  The Electoral College is designed to try to keep the big states from bullying the little states.

We would ask our New Jersey legislators, and those of the ten other states which have already passed such legislation, to repeal it.  It is bad law.  It is also, as one author already cited has observed, probably unconstitutional–it is an effort to end run the Constitutionally-mandated process.

If not, voters in New Jersey and elsewhere should prepare to file suit against the legislature.  The law disenfranchises the voters of this state, taking from us our constitutional right to choose the candidate of our own choice, not that of the rest of the country.