This is mark Joseph “young” blog entry #154, on the subject of The Danger of Cruise Control.

You may have seen an e-mail or similar communication warning of a danger connected to using cruise control.  It generally tells a story of a driver, usually a woman, traveling with cruise control who hits a puddle, loses control of the vehicle, and crashes, only to be informed by the police that it happens all the time.  There actually is a danger with cruise control, but it is considerably less severe than that story suggests, and if you understand a bit abount how it works, it’s not a problem. 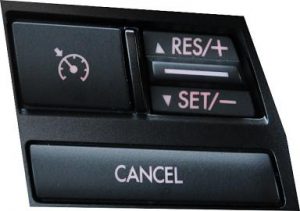 There is a story of the early days in which this was a new feature.  It is said that a man was driving a new Winnebago™, set the cruise control, and went into the back to make himself a sandwich.  Cruise control is not autopilot, and even autopilot (on airplanes) requires someone to monitor it.  We know that now, and since most of us are using cruise control in automobiles where we really can’t leave the seat while the car is moving it’s not likely to recur.  Self-driving vehicles are on the horizon, but already states are passing laws to require that a licensed operator be in the vehicle at all times when it is moving.

The disaster described in the story is simple to understand if you grasp how cruise control works.  It in essence reads the speedometer and adjusts the throttle.  If the signal to the speedometer decreases, indicating a reduction in speed, it increases the fuel supply to the engine, in essence opening the throttle an appropriate amount to compensate; if the signal indicates an increase in speed over the set value, it reduces the fuel supply.  Ultimately it balances such that the speed remains constant, the system responding to any changes in velocity more quickly than the driver can notice them.

The speedometer does not actually tell you how fast the car is going.  It tells you how fast the front axle is spinning, converted into miles (or kilometers) per hour based on the measured circumference of the recommended tires fully inflated.  That is, it takes the revolutions per minute of the wheel times the distance the car moves per revolution, and multiplies it out to get the velocity displayed.

The important part of that, for our purposes, is that what the speedometer is measuring, and thus that to which the cruise control is responding, is not your speed but the rotational speed of your front axle.

This matters because there are times when you are driving during which the rotational speed of the front axle is disconnected from the actual speed of the car.  It happens because the tires lose contact with the road.  It can happen on ice, on oily patches (including leaf oil from wet dead leaves), on sand or loose gravel, and most notoriously on water.  That is so common we have a name for it:  we call it hydroplaning.

One of the reasons tires have tread is to prevent hydroplaning.  There are other reasons; tread gives more traction on many surfaces, and allows the tire to form to the road better.  However, when you are driving on water on tires with good tread, the weight of the car pushes the tire to the road surface, squeezing the water into the tread so that you are making contact with the road and getting the water out of the way.  However, if the tread is bad or the water is deeper than the tread can handle, the water has nowhere to go, and the tire simply rides atop it.  When it does so, it is no longer making contact with the road, and the speed indicated by the speedometer (and read by the cruise control) has no relationship to your actual velocity.

At this point what happens is very much dependent on whether you have front wheel drive or rear wheel drive.

A problem arises if you have rear wheel drive.  The cruise control is getting its velocity information from the front axle, but controling the speed of the vehicle via the rear axle.  When the front wheels lose contact with the road, they slow–and when they do so by hitting water, they frequently slow abruptly.  The cruise control reads this as the vehicle suddenly slowing, as perhaps from a hill or severe headwind, and compensates by increasing the fuel to the engine and so increasing the velocity of the rear axle, propelling the car forward rapidly.  This is the situation in which the woman in the story loses control of her car, as it moves madly, being driven forward with no ability to steer (because the same factor that prevents the front wheels from providing accurate velocity information also disables their ability to control direction) and what seems the inevitable crash.

With every cruise control system since they first appeared, if you as much as brush the brake pedal with your foot the cruise control disengages instantly.  That means that if your car suddenly lurches forward, and you as a seasoned driver instinctively apply the brake, you’ve stopped the acceleration and are now in a position to control the velocity of the vehicle.  Sure, it’s a scare, a shock–but not more so than having a deer run in front of your car.  Yes, stopping fast on slick roads, whether icy, oily, or wet, can be challenging, but it is something drivers learn to do.

It should also be noted that many cars with cruise control also have an automatic shutoff built into this that reacts to puddles:  if you hit something like water, it will recognize the abrupt change in road surface and interrupt the speed control.  Also, anecdotally, I was told by a mechanic some years back that the number of new cars with rear wheel drive had fallen so significantly that he knew mechanics who didn’t know how to work on them.  So the probability is fairly high that your car doesn’t have the serious problem, unless you drive a truck.  (If your car has that “hump” down the middle, that’s the space for the drive shaft, so you have either rear-wheel or four-wheel drive.)

It’s probably safer not to use cruise control in heavy rain or on icy roads, but that’s something of a judgment call.  For some drivers, cruise control is dangerous simply because they expect to be able to slow the car going into curves by releasing the accelerator and are not accustomed to tapping the brake to get that outcome.  For some drivers it is more dangerous to drive without cruise control, because the tendency to accelerate can put a car well over the safe speed limit before the driver realizes that his heavy foot is getting him into trouble.  You can disable the cruise control as quickly as you can slow the car without it, so, to use the expression where it is almost appropriate, “your mileage may vary”.  Just be aware of what the system is likely to do under slippery road conditions, and be ready for it.