This is mark Joseph “young” blog entry #144, on the subject of Shutting Off the Jukebox.

You may have seen the story:  someone complained to a restaurant about being subjected to the music during dinner.

I have much sympathy with this attitude.  I often find in public places that I am subjected to music I don’t want to hear–crying-in-your-beer country songs about adultery, popular rock songs about drug use, bland elevator music about nothing at all.  I would like to replace it all with music I enjoy, rather than risk having those “earwigs”, the songs that get stuck in your head for hours that you don’t like but have heard often enough that they stick with you once you are reminded of them.

But it wasn’t that kind of music to which the patron objected.  It was Christmas music. 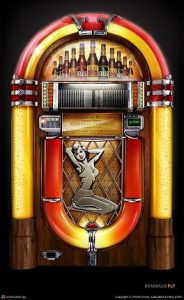 Again, call me sympathetic.  There is a lot of music played this time of year I really find offensive–all those terribly secular songs like Rudolph, the Red-Nosed Reindeer, Santa Clause is Coming to Town, or Rockin’ Around the Christmas Tree, that have nothing to do with the real point of Christmas.  Yet when it comes down to it, those were exactly not the songs to which the patron was objecting.  The restaurant was playing “religious” Christmas music.  I don’t know what in particular was being played–the Robert Shaw Chorale offers quite an extensive collection of sacred Christmas works, but so do Amy Grant and Casting Crowns, in a very different style.  What the patron recommended, though, was replacing Christmas music with “holiday” music, which I presume means songs like Silver Bells, Jingle Bells, maybe Deck the Halls, instead of perhaps The First Noel, Silent Night, or Joy to the World.  And so it seems that exactly the kinds of songs he finds offensive are the ones I would prefer, and the ones he would prefer are the ones I find offensive.

And that’s why we have our freedom of expression laws.  As we noted, the point of Ray Bradbury’s wonderful Fahrenheit 451 is precisely that if we permit everyone to veto any expression he finds offensive, there will be no expression left.  We can turn off the jukeboxes and retail store sound systems, and protect all our customers from the possibility that we might play something that offends them.  While we’re at it, we can shut off those music-playing-while-you-are-on-hold telephone systems, too.

We will be the poorer for it, of course.

As far as playing religious Christmas music, it should be noted that religious Christians are the reason we celebrate the holiday.  I know that people are going to object that many religions everywhere celebrate a holiday on or near the winter solstice, and Christians only put Christmas there to usurp the holiday celebrations that were already happening–but that’s not what I mean, either.  In the nineteenth century people were expected to work six days a week, with time off on Sunday for church, and the Federal government followed that pattern.  However, late in the century it was observed that on Christmas Day so many Federal workers called out “sick” in order to go to church that it was impossible to run government offices on the skeleton crew that reported for work.  Thus a decision was made simply to give everyone the day off with pay, and it was soon put into law (along with New Years Day, Independence Day, and Thanksgiving Day, which had previously been established as a national day of Thanksgiving but not a holiday).  Banks followed suit, because there were certain things banks needed to do when they were open that could not be done if the government was closed, and gradually the rest of the world caught up.  We can debate the ethics of Christians calling out sick to go to church, but the fact is that it was that action which gave us paid holidays.  Very few Christians go to church on Christmas Day anymore, but at least we celebrate it with our music and other festivities.  So if you don’t like the religious music, at least say thank you that there were enough people who thought the day was important enough to warrant a religious celebration that the rest of us got a paid day off work.

But beyond that, every single one of us has to tolerate some music we don’t like, because every single one of us dislikes something others like–whether it is a distaste for Beethoven or Beatles, for Rap or Rock, for Country or Classical, show tunes or ska, Ives or Jazz, there is no music that pleases everyone, and “no music” does not please everyone, either.

The jukebox worked on something of the “majority rule” system:  the owner tried to stock it with the records people were most likely to pay money to hear (the origin of “Top 40” radio), and the people picked the songs they wanted.  Not every public facility can accommodate everyone’s tastes, and so the owner or manager or someone in an executive position (even if it’s only the night waitress) picks something.  In some places, those choices are based on scientific consideration of what kind of music will get customers to spend more money; in some they are based on what the management thinks people will enjoy; in some it is based on what the manager likes, or what is available.  Most of us have no say in what kind of music people play in the establishments we frequent.

The person who complained was within his rights, and certainly in some sense was right to do so:  the management of a retail business of that sort should be aware if his music is hurting his business, and so needs to know the opinions of his customers.  It was not, however, entirely unpredictable that a large number of customers, and an even larger number of people in the outside world, would enjoy the Christmas music and encourage the owner to continue playing it.

The customer who doesn’t like it will have to decide whether the benefits of eating there are worth the aggravation of music which he does not like, or whether there is another restaurant which caters to people who want different music, or no music at all, whose food, service, and prices are as good.  That’s the way it works.

One thought on “#144: Shutting Off the Jukebox”