This is mark Joseph “young” blog entry #92, on the subject of Electronic Tyranny.

I encountered an article–I did less than read it, but more than scan it–which ironically was apparently written by an expert in social media working with LinkedIn, if I understand aright, explaining why she had shut down her Facebook account.  She also had decided to deactivate her smartphone for several hours each evening.  She explained that it had been taking over her life, and now she finds she has much more time for more important things, like her writing and in-person personal interactions, relationships.

I apologize for being bored.  I use Facebook as my primary mode of communications, but I do understand the problem–and I understand it because I faced it and addressed it long before Facebook was an issue.  In fact, there was a name for this problem when it was a much smaller problem.  It was called The Tyranny of the Telephone. We have the same problem, only bigger; and the same answers address it, only modified for the new shape. 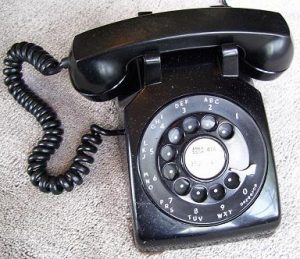 By the early 1960s, telephones were ubiquitous; it was probably earlier than that, but that’s a time I can remember, and it’s important for another reason.  Almost every home–certainly almost every suburban home–had one, and people used them for all kinds of things they previously did in person, like making appointments with doctors and talking to friends and selling life insurance and magazine subscriptions and promoting political candidates.  There was a weak attempt at establishing a standard of courtesy, such as when you called someone the first thing you should say is who you are, but this did not really take hold.

What was unexpected about the phone was the way in which it took over our lives. You could be entertaining sixty people spread across three rooms at a family gathering, but if the phone rang whoever was calling would expect, and get, your undivided attention for however long they chose to stay on the line, almost never asking whether it was a bad time.  You could be deeply involved in a work project, but if the phone on your desk rang you suddenly were interrupted by whoever was at the other end, for whatever reasons they had for wanting your involvement in what they were doing.  It was unlike any social interaction previous to it. If someone knocked on your front door and you were busy, you asked them to wait. If someone called on the phone, you asked everyone else to wait.

Around that time, in the early 1960s, my father, who at that time was an engineer with Western Union, attended a major telecommunications industry conference.  The president of AT&T was the keynote speaker.  For those who don’t know, prior to the antitrust breakup in the 1980s which allowed the launch of other long distance telephone services and ultimately the creation of independent local telephone companies, American Telephone and Telegraph was the phone company.  They provided nearly all local and long distance telephone service throughout the United States, and their Bell Labs was one of the leaders in electronic development and experimentation (I believe they invented transistors and were among the first to work with fiber optic data transmission).  In his keynote address, he spoke of many of the technological advances in telephone technology he perceived as coming within the decade, many of which did come in that time while others fell away for lack of interest for a few decades.  He predicted call waiting and call forwarding and caller ID, picturephones, and telephones with remote service that you could carry with you into the wilderness.  As he finished, he said that he could foresee the day when if you wanted to speak with someone you could pick up a phone, dial one number, and if he didn’t answer you could be pretty sure that he was dead.

What the president of AT&T did not understand then was the possibility that most of us sometimes and some of us most of the time would rather not be readily available to anyone and everyone, that we would want to disconnect from the world for a while, be voluntarily incommunicado.

I say I understand the author’s problem, but am bored by it because it is old news.  In the late 90s I installed maybe all the popular instant messaging programs–ICQ, AIM, Yahoo!Messenger, MSN Messenger–and made myself available to anyone looking for me.  I was, after all, designer of a recently published game, and I needed to be available to answer questions–and I had launched several then independent web sites on time travel, D&D, Bible, law, and more, and needed to be available to people with questions about those.  What I found in the main, though, was that if you were visibly “on” such networks, it was like attending a large house party–people would see that you were available and assume that you had nothing better to do than chat with them.  I didn’t want to be rude, but I was at work trying to get web pages posted, new worlds written and edited, a novel completed, and more.  I would try to get these people to come to the point, to ask their question, to get past the pleasantries–only to realize there was no point, no question, only pleasantries from people who were bored and wanted to talk.

My response then was as drastic as that of the current author:  I shut down all those programs.  I’m not sure whether I could find the passwords and user names if I wanted them now, and I’m not sure which, if any, still operate, but I removed them from my schedule and found indeed that I had a lot more time, and a lot less contact with some people.

I went through something similar with electronic mail.  Every day I would download a large quantity of e-mail messages, attempt to discard anything that I could tell was obviously Spam (something at which I have improved), and then read through the substantial remainder and write responses to most of them.  Some would take perhaps not hours but certainly dozens of minutes, explaining complicated issues in temporal anomalies or answering a Bible question that had real personal meaning to a correspondent, and I would send these missives as soon as they were complete.  Then when I had finished all the mail that had been downloaded, I would hit the download button again, and get more–usually at least some of it replies to letters I had just sent, often requiring additional substantive responses.  This would happen several times every day, and my e-mail engagement would take several hours of my work time.

This time I handled the problem more intelligently.  My first step was not to download the second time–that is, if I downloaded mail at two in the afternoon, anything that hadn’t arrived by then would wait for the next day.  I did this because I realized that some people were using e-mail as if it were an instant messaging program, and I had eliminated instant messaging programs because they took over so much time in my life.  These e-mail conversations were doing the same thing.  Cutting them to one message a day saved a lot of time.  It saved so much time that I gradually cut it back further, first to every other day, then to a regular schedule of five times in a fortnight.  Eventually I realized that anyone who needed to reach me urgently either had my cell phone number (very very few, it was intended for emergency texting) or could reach me through Facebook.  Anyone who sent me an e-mail was not in that big a hurry to get an answer, and today I check e-mail about once a month, plus or minus a couple weeks.  I’ll get to it eventually.  It’s not usually that important, and I don’t need to let it take over my time.

I poke my nose into Facebook several times a day.  I was recently gifted with a smartphone, and added the Facebook apps so I can check when I am not at my computer.  However, I control my Facebook–I don’t look at my feed or try to follow what my friends are doing, and they know that I am unlikely to notice anything posted that is not in some way directed at me (a private message, a post to my wall, or a post in which I am tagged) or made in one of the few groups which have priority in my preferences.  I don’t have to delete Facebook to control it; I have to control myself.

The electronic world has the potential to consume our lives, to take time from other more important activities.  That has been true since its beginning, with gramophones and nickelodeons, radio and telephones, television, video games, personal computers, bulletin board systems and online services, cellular phones, Internet and e-mail and smartphones, and whatever comes next will undoubtedly be the same only more.  We can be the Luddites trying to cut ourselves off from its progress, but it does not stop that progress and does not improve us nearly as much as learning to control ourselves so we can use such advances as Facebook wisely.

Deleting your Facebook account strikes me as a desperate attempt to get control of your life, along the lines of those in earlier times who removed their television sets and had their phone service disconnected.  The problem is that you are letting it control you; the solution is to learn to control it.