This is mark Joseph “young” blog entry #89, on the subject of Novel Confrontations. 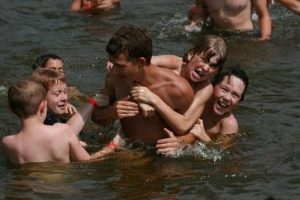 I needed to bring back the clue about the acorn.  It was going to be important in the third book, and so it needed to be remembered.  Using it in passing to get to the marble made sure it was mentioned without being emphasized.

The eyesight trick had a lot of uncertainty to it.  For one thing, it hadn’t occurred to me that the first thing she was likely to do was create light, and so all this preparation for fighting in darkness was unimportant.  Also, I thought I might use it in the end scenario, but I didn’t really have any idea how (and in fact I didn’t).  The whole black and white versus color thing was interesting to me, but not terribly useful but as a way of making it seem like something was happening while they waited.

The luck of the dice gave me a string of potentially disastrous situations, and the opportunity to have Kondor worry about whether he was ever going to reach civilization with his crate.

The idea that Kondor can tell himself he is not superstitious simply because in thinking about whether or not his emeralds were the cause of recent events he does not use the words “luck” or “curse” shows the shallowness of his antisupernaturalist views.

The customs problem was an afterthought, something to keep the story going.

The camp routine was built from my own camp memories.

Bob is a conglomerate person, but somehow I think that John Walker is a significant part at least of his temperament.  But John is not terribly religious.

Bill always calls to mind Bill Friant, so he’s big, powerful, slow-moving, kind-hearted; I don’t know if Bill goes camping.  The pack was there so Derek could take it with him (remember, Derek needs a pack).

Pete isn’t anyone.  Neither is Ralph, although I knew a Robert Schwartz back in elementary school (in Scotch Plains, through the ’60’s) who may have contributed a bit to this one.

My mom always liked the copper enamel jewelry; I often wish I could make it at home.

I had briefly considered the possibility of the dungeon master killing the players, but it was so lame and unrealistic an idea I didn’t stay with it more than a few seconds.  However, it led to the idea of the anti-gaming kid doing it.  Also, I created the player interests to match the murders at this point–except for David, whom I had already created as a lifeguard so he could patch the tire.  The story characters were then matched to the game characters in a way that captured a bit of each personality (I thought) and also fit with the murders.  And I introduced Michael as the anti-gaming character.

The game is clearly Dungeons & Dragons, although it never says so.  Roll your own fate is more something we say in Multiverser games, but it applies here as well.

Mary Healy was the name of the old lady who lived next door to us in the ’80’s.  I think I took the name Marybeth from one of my wife’s high school friends I had met briefly but who was often in her stories.  She was just a name.

Having Derek learn to use a bow was supposed to open into the use of the weapon in the future, but the situation didn’t arise until the third book (and it only occurs to me now that it will).

The extended scripture from Romans 8 was thought too long to use in combat by the editor of the first novel; yet it was so strongly defensive I wanted to continue using it.  The solution seemed to be to run it against unrelated physical actions which would enable her to pronounce the words while fighting.

I had not decided whether another vampire should appear that night or not; but on reflection it seemed once they had prepared for it such an appearance would not add to the story.

The customs interruption was a sudden inspiration; it would help to have something go wrong, and this seemed ideal.

The difference between studying for credentials and studying for knowledge was something I learned in college.

It seems to me that I went on a treasure hunt during an overnighter at a Y.M.C.A. day camp.  I remember the counselors went with us, and that there was a problem about the clues being in the wrong places.  I didn’t actually create counselors for this story, but these were older kids and it didn’t seem a problem to let them go on their own.

It was important that the boys were always separating when they ran from place to place, because it meant no one knew where any of them were at any moment.

I suppose that my ship-to-ship combat ideas are a combination of playing Pirates (a computer game) and watching a few swashbucklers like Captain Blood.

I don’t think I’d considered this as an opportunity to remove Kondor from this world right away.  It was more an afterthought once the combat began, that I could find a colorful way to remove him, and ultimately I’d gotten all I could from this scenario and needed to move forward.

In the early ’80’s during a D&D game, Bob Schretzman lent me a book about ships of this period.  I don’t remember much about them, but tried to put what I recalled to good use.

My father-in-law had a ring with a star sapphire which she remembered being silver; it was supposed to go to my wife after his death and she had wanted to give it to me on our twenty-fifth anniversary, but it was too small for my smallest finger and got put away to await a day when we could afford to size it (it turned out to be gold).

Joe is of course going through the stage two dream state as he comes into his next world; the imagery of the dead comes from his surroundings.

Derek’s story was heating up, and Lauren’s was slowing down, so I jumped him ahead of her here.

Michael bringing the nurse is actually the first real clue to this mystery.  He was supposed to find the camp director, and let Bill get the nurse.  He brings the nurse because he knows that Bill is dead.

The mention of the defibrillator was difficult.  Derek’s story has to reflect Derek’s thoughts and observations, as it is from his perspective; the use of the proper name for the device in the direct narrative seemed to break that.  I tried to capture his perception by calling it a “portable electric shock thing” and then parenthetically stating that he didn’t know the name for defibrillator.

The mention of Pete playing the archer is another clue, pointing to the game as the motive.

Lauren here invents a new psionic skill from consideration of two other psionic skills.  It is part of the process that makes her mind skills a bit more credible to the reader:  she doesn’t simply decide she wants to do something, she thinks through a way to do it.

When I created Garla at this moment I did not know what I would do with her in the future; I just needed a werewolf, and I needed a reason to put Lauren in a cave in the woods, and this did the job.

The cave was a sudden inspiration.  I was thinking at that moment in terms of a place for Lauren to wait; but I was also going to need a place for her to live for an extended time, to create the legend of Laurelyn of Wandborough I needed, and the cave suited that.