This is mark Joseph “young” blog entry #9, on the subject of Abolition.

In the abortion debate, the argument against restrictions and regulations of this medical procedure is that they rob women of autonomous control over their own bodies, that they are, in a word, a form of slavery.  Anti-abortionists are portrayed as oppressing women, stripping them of their rights to make decisions about their own bodies, forcing them to bear children and then to be responsible for those children, whether raising them or surrendering them to be raised by someone else.  In the words of Shakespeare’s Benedick (Much Ado About Nothing), “The world must be peopled.”  That, though, does not mean we can enslave women to do the job, whatever Japan’s Liberal Democrats think.

The second statement made is that conservatives claim to care about such children up to the moment they are born, and then all such concern ceases.  Indeed, conservatives are portrayed as callous haters who would prevent a woman from receiving the medical attention she needs to remove a parasite but then do nothing to aid her in the pregnancy or thereafter.

The second answer to this is that this is not actually true.  I have worked with a “Crisis Pregnancy Center”, in the efforts to found and launch it both by lending such meager labor assistance as I could to making the offices functional and in training the first batch of staff and counselors.  Everyone with whom I worked was there to make it possible for women and girls with unexpected pregnancies to carry their babies to term and see to their subsequent care.  That included obstetrical exams and services, teaching in infant and child care, the provision of furniture and clothing and formula and diapers, help with social services, contacts with adoption agencies, counseling concerning the benefits and disadvantages of raising a child versus releasing it for adoption, and more.  There are conservatives on the ground doing exactly what it is charged they are not doing.

However, there is a first answer, and this mention of slavery brought it to my attention.  In the nineteenth century, abolitionists, mostly in the north, wanted to free the slaves. 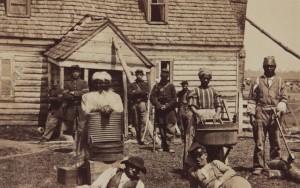 In retrospect, we know that this emancipation was expensive on every level, with economic and social costs we perhaps are still paying.  In my mind’s ear I can hear the slavery party arguing that northerners want to free the slaves, but don’t want to commit to taking care of them once they are free.  I do not know whether that was true; none of us were there.  What I do know is that the fact (if it was a fact) that abolitionists made no commitment to caring for the freed blacks was a very poor argument against freeing them.  They needed to be helped in rising from poverty, at least in having obstacles removed, but whether or not that was going to happen they first needed to be freed.  So, too, children need to be helped, fed and clothed and of course loved and taught, and mothers need the support of fathers, family, community, nation, and churches, to see that their “unwanted” children are provided with that care.  First, though, they need to be protected from the oppression of having life stripped from them before their breathing has shifted from amniotic fluid to air.  Even if it were true that the people who want to protect their lives before they emerge into the world make no commitment to assisting those lives beyond that moment, to kill them before that emergence on that basis would still be as wrong as, more wrong than, to refuse to free the slaves because no one would help them once they were freed.  Our obligation to help the born is a problem, but it is a separate problem from whether to protect the lives of the unborn.  That freeing the slaves proved to mean economic and social costs thrust upon society for generations to follow was never and would not have been a good argument against freeing the slaves.

Yes, just as it was necessary for those who favored ending the enslavement of the black people also to commit to helping those people integrate into American society, it is necessary for those who favor ending the slaughter of the unborn to commit to helping the born rise to share the prosperity of the nation.  However, just as an unwillingness to make that commitment was not a good excuse not to free the slaves, neither is the uncertainty of our commitment to helping children a valid excuse for continuing to kill them unborn.

In addition to the above-linked piece Liberal Democrats Offend Women Again in the page Discrimination, there are also several related points raised in Miscellaneous Marriage Law Issues, particularly in the sections Births and On Negative Population Growth.  A connection between slavery and abortion was also suggested in Was John Brown a Hero or a Villain?  See also mark Joseph “young” web log entries with the same “tags” by following the links.

One thought on “#9: Abolition”