This is mark Joseph “young” blog entry #449, on the subject of Cruel and Unusual.

The Eighth Amendment to the U. S. Constitution, part of the Bill of Rights, prohibits, among other things, “cruel and unusual punishment”.  (It also prohibits excessive fines and excessive bail.)  As I was reading the accounts in the Gospel According to Matthew and its parallels of the trial and crucifixion of Jesus, it came to mind. 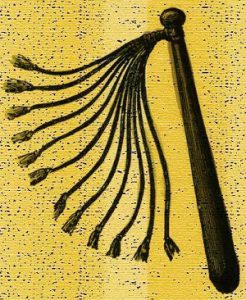 One point that stood out to me is that crucifixion has long been regarded the most torturous way to execute a criminal.  It isn’t really that spikes driven through wrists and feet are painful (although they are certainly excruciating–the word itself means “from crucifixion”), but that the victim survives this and hangs by his arms, sometimes for weeks, struggling to breathe.  He painfully lifts himself with his legs to get air, but eventually is too exhausted to do so, and suffocates.

Yet before sending Jesus to be crucified, Pilate had Him whipped.  This seems the epitomy of adding insult to injury:  you have been condemned to die the most horrible death mankind has ever inflicted on anyone, but before you do we’re going to thrash your back until it is swollen and bleeding.

In fairness to Pilate, there is some suggestion in the accounts that he was up against a group determined to see Jesus executed, and he may have hoped that were he to beat the prisoner adequately it would satisfy the accusers and they would allow him to release Jesus.  It didn’t work.

However, it got me thinking, what exactly is cruel and unusual?  The problem is, they are both relative concepts.  When the Founding Fathers included those words in the Bill of Rights, they clearly meant such things as stocks and forms of corporal punishment such as beatings.  They as clearly were not outlawing capital punishment, as executions continued unchallenged for over a century.

Some years ago I wrote a bit of political satire in which I suggested that there was something wrong with our treatment of murderers.  Many states still had the death penalty then, and if you committed a heinous enough murder or series of murders you could be put to death for it.  Yet everyone dies, and many people die either painfully or unexpectedly or both.  We take the surprise factor out of death for those we execute, as we ultimately give them the exact date and time that they will die; they can prepare for it.  Further, we make every effort to make this as painless as possible.  The Romans crucified many criminals, but if you were a Roman citizen you could not be crucified, you would instead be beheaded, which was a much quicker and less painful way to go.  The Guillotine was invented as an improvement on this, a more reliable way of beheading which was thus less likely to be very painful.  Long rope hanging was developed precisely for the purpose of making death quick and relatively painless.  We want to kill our criminals, but we don’t want to hurt them.  And thus if you wreak enough pain and horror and fear, you get to die quietly and painlessly and with certainty.  It seems almost a reward for your efforts.

Today we have lethal injection:  the administration of the right doses of the right chemicals theoretically puts the convict into a sleep from which he will never awaken, and so he dies painlessly.  Yet it seems that it does not always work so, and part of it is that not every execution uses the same chemicals.  There are drugs that make such executions painless, but the companies that produce these, yielding to pressure from those who oppose capital punishment, are refusing to supply them to the states that would use them for this.

The strategy of that opposition is that if those states cannot get the drug that makes lethal injection painless, it will become cruel and unusual, and the courts will block it.

It is a clever strategy.  It is also a bit unfair–that is, undemocratic.  It also is very subjective.

It is undemocratic because the people who want to end capital punishment are not getting legislatures to change the laws, but getting courts to act as tyrants and rule that the law cannot be enforced.  If you don’t like the law, you should work to change it through the legislative system, not attempt to finesse it through the courts.  Besides, it’s also very dangerous to give that power to the courts, because then they will be in a position to exercise it if their opinion swings against you.

That is the other problem:  what is cruel is subjective, and what is unusual is subjective.  Within these United States, hanging, including short-rope hanging, was not considered either cruel or unusual, and in other common law countries beheading was still used.  Firing squads have been used for U. S. military executions, which are also covered under the Constitution.  Any state which finds itself blocked from using painless lethal chemicals for their executions could easily institute one or more of these other methods.  Some of them already have those options available by law.  The tactic could backfire severely.

An argument that executions that are not completely painless are unconstitutional fails the test of history.  Those who wish to eliminate capital punishment should focus on getting legislatures to change the laws, and stop trying to end-run democracy.  I wish them success in their efforts to do this the right way.