This is mark Joseph “young” blog entry #434, on the subject of Foolish Wisemen.

For most Americans, Christmas is over.  Many took down the decorations on Boxing Day, and few will leave them up past New Year.  Yet this isn’t really about Christmas.  After all, we know that the wise men did not actually find Jesus in a manger in a stable; we are told they found him in a house.  Had they arrived and given gifts of significant value, Joseph and Mary would have had to offer a lamb with their two birds as an offering for her cleansing, but we are told that the couple delivered the poor man’s pair of birds.  Unless we think that the gifts were paltry tokens, they had not yet been delivered in that first week, and not before the couple made a trip to the temple.  Some of us celebrate Epiphany, which is a somewhat random number of days after a somewhat randomly assigned date of birth, but makes the point that the wise men didn’t get there that first night.  But that’s not what this is about, either. 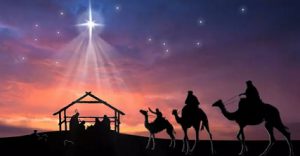 Rather, I am recalling Balaam, who in Numbers 24:17 prophesied in the famous words “There shall a star from Jacob come forth”.  The Israelites preserved those words, and recognized within them a messianic prediction.  However, Balaam was not an Israelite; he was from Mesopotamia, the land whose people became the Medes and Persians, east of Israel.

It seems that they, too, preserved those words.  Matthew makes the connection for us, that wise men, scholars who studied the books and the stars, came from the east, which would probably mean Persian astrologers, because of a star–probably the star predicted by their ancestor Balaam.  It didn’t need to be a big, bright, obvious star; it needed to be a configuration of celestial objects that they understood to mean the birth of the ruler predicted by their own ancestor.  Seeing the star, they came to bring gifts to the baby, and to honor him.

Then they left, and we read nothing more about them.

Of course, it would be three decades before Jesus worked the miracle of redemption, and another several years before the faith was pushed out of Jerusalem into the rest of the world.  Whether those scholars still lived we don’t know.  But there is this question:  did these scholars who were aware of the arrival of the Anointed at His birth, who made a great effort to find Him and gave Him valuable gifts, ever do anything else, learn anything more, actually come to faith in Him?

And that question then transfers to the people of our time.  How many celebrated the birth of Christ, one way or another, recently, spending significant amounts of money and time and effort on the holiday, who never returned to see what more He had done?  The deliverer came, and those needing deliverance honored that arrival; but then they left, never to be delivered.