Regis Pannier and his kind staff over at the French edition of Places to Go, People to Be, who frequently translate my gaming articles for distribution to their audience, recently provided me with a link to a section of what is called the Internet Archive, complete with The Wayback Machine (I knew Mister Peabody had invented something useful) in which a very large number of my Game Ideas Unlimited articles have been preserved in whole, and a few more in part, along with some Blogless Lepolt entries (my old Gaming Outpost web log) and a couple of book reviews.  With encouragement from readers I am going to attempt to republish most of this material.  Most of the Game Ideas Unlimited material will go to the current RPG-ology series at the Christian Gamers Guild, although some of it might come here; one of the web log posts (about Harry Potter has been slated for the Faith in Play series early next year, and probably a few articles and particularly the book reviews will be coming here.

This is the first of those, originally published November 5, 2007. 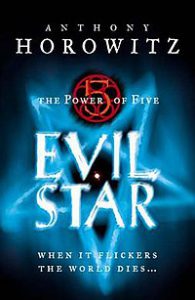 I was handed a reviewer copy of this book, Evil Star by Alexander Horowitz; it is billed as the second book in The Gatekeepers series.  The first, Raven’s Gate, escaped my notice despite being on the New York Times’ Best Seller list at some point.  (That has more to do with my inattention to such lists than with any lack of merit in the book.) It is entirely accidental that I received this book.  It was tossed in the bag with my copy of Harry Potter and the Deathly Hallows, because the bookstore was celebrating the release of the book and looking for things they had around that they could give away.  The person who gave me this book had no idea that I was a reviewer (he did know I was an author, and had read my novel), and no expectation that I should review it.  However, I read it, and since it was a pre-release “early reader edition” copy I thought I would write a review.

I am sorely tempted to call this series, “Harry Potter Meets Cthulu”.  The connections seem to scream at me.

The hero of the series, Matthew Freeman who prefers to be called Matt, is in this book fourteen years old; that makes him a bit older than Harry was in his second book (he had just turned twelve).  It is not clear to me, however, how old Matt was in the beginning of the first book.  Like Harry, Matt is an orphan, although it seems his parents really did die in a car accident and not until he was eight.  That tale is told, apparently, in the first book.  Like Harry, Matt has powers he does not understand and cannot always control; he was aware of the car accident before it occurred, and he sometimes has similar premonitions here.  He also sometimes causes telekinetic events, but through severe emotional upset, not intention.  He is even described as thin with unkempt dark hair and blue eyes.

The similarities to Harry don’t end there, though.  We are told that there are seven gates, and apparently each book revolves around the effort to keep the next one closed.  first grade math says that means there will be seven books in this series, just as there were in the Potter books.  Matt is the hero, the focus of the stories; his friends, young and old, help him, but in the critical moments he is the one on the line.

In fairness to Horowitz, at least some of these are the tropes of the genre: fantasy books for adolescents have adolescent heroes.  Cry of the Icemark* was similar in some ways.  Matt does not have a group of adolescent friends; he has the friendship of a young adult reporter, and the support of a secret international organization, but he is completely estranged from his peers.  No one is helping him learn to use his powers.  He is not exactly unique; there is much in the book about “the five”, of which he is the first to be identified, and he dreams about the other four trying to reach him.  Still, in this book one of the others does reach him, recognizing him from his own dreams.  He, too, has powers he does not understand, but they are very different powers.

As to Cthulu, he is never mentioned; however, the series revolves around a set of gates through which the “Old Ones” threaten to return to bring darkness to the word, and this book focuses on an ancient newly discovered book which tells how to open one of those gates.  A wealthy reclusive businessman is the evil monster attempting to get the book and open the gate.

I did not feel that Matt was as familiar a character as Harry.  It was a weakness of the book that I had trouble identifying with its hero.  Harry stayed with family members who did not like him, but Matt had an insane former foster mother trying to kill him.  Harry was alone at school but for a couple of friends, but Matt was alone on the streets of the Peruvian slums with a boy with whom he shared no common language.  Harry meets creatures of fantasy and learns to control his power through the mentoring of those more experienced than he, while Matt meets Incan survivors and struggles to work through his own use of his powers.  Where Harry’s powers made us feel that he was special, Matt’s powers make us feel that he is different; we want to be like Harry, but not like Matt.  Even the fact that Harry goes to school in what seems a very ordinary way (despite it being a school for wizards) gives us a point of contact; Matt is behind in his education, because his life is constantly interrupted and he has to move to another school.  It just never felt like Matt was a sympathetic character.

On the other hand, the author takes us on quite an adventure.  Matt is the reluctant hero here; he wants to be a normal boy, but he’s not normal, and fate will not leave him alone.  In his new school he is the outcast, and the fact that he pulls the fire alarm before the explosion that would have killed almost everyone only makes him less accepted.  The Nexus, the organization that is fighting this battle, wants and perhaps needs his help, but he is trying to avoid getting involved–and yet gets pulled half way around the world and into the midst of the trouble as events unfold.  It is not always clear who are the villains and who the allies, and more than once he flees from those who would have helped him.  Scores, maybe hundreds, of people are trying to help him, but at the critical moment he stands alone but for the other, younger, boy.

The book is laced with some wonderful images, many of them descriptions of Peru from its ancient wonders to its modern slums.  If there is a fault here, it lies in the interlacing of fantasy elements–a hidden Incan city, secret passages in those preserved wonders known only to the surviving Incans–with the hard facts.  Even I am not certain where the facts ended and the fantasies began at times.  That is only a fault because of the wonderfully clear portrayals of the realities of Peru, the author’s skill at bringing us into that place, and because (being published by Scholastic) it is targeted at a teen or pre-teen audience who will benefit greatly from the look at that society, if they can sort out the reality from the rest.

The copy I have has a number of errors in it which caught my eye as an editor, which may also have caught the eye of Scholastic’s editors before the finished version went to press.  Most of these are minor typos, a wrong but similar word here or there.  The mistake which most bothered me involved a description of the actions of a minor character, a truck driver on his way to be beaten and robbed.  Before the incident we are told that he is thinking about asking a certain waitress at a certain truck stop out on a date; after the incident we are told that his wife was contacted and gave them important information.  I prefer to think that the author overlooked part of what he was doing, rather than that he perceives married truck drivers commonly asking women out on dates; I hope, at least, that this was a mistake, and that it was corrected before the final copy.

I am tempted to attempt to obtain a copy of the first book.  After all, it is often the case that one book in a series is weaker than the others, and this might be the weaker book.  It is not a bad idea for a series; the Lovecraftian horror concepts are present but not terrifyingly so (although I’m probably not the best judge of that–Lovecraft has never frightened me).  There is madness, there is betrayal, there are evil people working toward evil ends.  Matt does not always emerge victorious, does not always make the best decisions, and is not always eager to do what he must do.  However, he proves the hero through his efforts, and moves an epic story forward a significant chapter.  I wouldn’t expect this to be the stuff of a best seller, but then, such things are determined by factors other than how they appeal to fifty-something author-reviewers.

—–
*A review of Cry of the Icemark had been previously published, and has been saved, and will be copied here within a few weeks.