This is mark Joseph “young” blog entry #245, on the subject of Unspoken Prayer Requests.

In Matthew 18:19f, Jesus says (in the Updated New American Standard Bible), Again I say to you, that if two of you agree on earth about anything that they may ask, it shall be done for them by My Father who is in heaven. For where two or three have gathered together in My name, I am there in their midst. 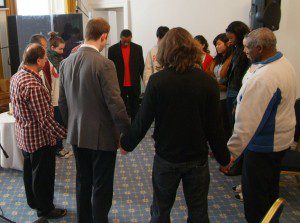 From this we quite rightly have prayer meetings, gatherings in which believers share their concerns, needs, troubles, and pray for each other, believing that God will answer.  This is good.

However, it often happens at such meetings, and in church services when prayer requests are elicited, that someone will make what they have come to call an “unspoken” request.  It comes down to “I want you to pray with me, but I don’t want to tell you why.”  I have some serious theological problems with that notion, which I will explain here–but I recognize the importance of being able to ask for prayer without sharing secrets, so I’ll address that as well.

To begin, when we agree together in asking, as that verse says, it inherently means that we are agreeing, that is, knowingly asking for the same thing.  It is difficult on its face to see how I can agree with you in prayer about something you’re not telling me.  Of course, you will say, God knows what it is that you are asking, and I can just agree with that.  Yet can I?  I think scripture says otherwise.  In I Corinthians 14:16, after discussing the notion of someone praying in tongues in the presence of someone who cannot interpret and therefore does not know what is being said, Paul writes Otherwise if you bless in the spirit only (that is, in tongues), how will the one who fills the place of the ungifted say the “Amen”…?  “Amen” means “I agree” or “so be it”; it is in essence saying “yes” to what has just been said.  Paul’s point here is that if the other person doesn’t know what you just prayed, he can’t agree with it.

If that applies to praying in tongues, where something actually has been said but I don’t know what it is, then certainly it must apply in “unspoken” prayer requests, where nothing has been said but I am asked to agree.  I can’t very well agree with a prayer without knowing what is prayed.  What am I praying?  “Lord, I agree in asking that nothing be done for this person”?

Further, in II Corinthians 1:11, Paul talks about people agreeing in prayer while apparently great distances apart from each other, saying you also joining in helping us through your prayers, so that thanks may be given by many persons on our behalf for the favor bestowed on us through the prayers of many.  That is a very significant statement, because it partly explains why God is more likely to answer a prayer where people have agreed than a petition from an individual.  God wants the credit.  When He does something on our behalf, He wants us to thank Him, and the more people thank Him the better He likes it.  It’s called “giving God the glory for what He has done”.

That means that any time you ask anyone else to pray for you, you take to yourself two obligations.  The second, the one obvious in this context, is that you are obliged to return to that person, or those persons, and tell them about God’s answer to their prayers so that they can give thanks.  If you’re not going to do that, there’s no reason for God to bother answering.  The other is inferred from it:  if you want people to be able to give thanks for the answer to their prayers, you have to tell them for what they are praying.  If I am praying some sort of “I agree with whatever it is he wants even though I don’t know what it is” prayer, then I’m not in a position to know whether that prayer has been answered.

Yet of course we should bring our burdens to each other and pray for each other and get prayer from each other.  Still, we are all going to have difficulties which we rightly prefer not to share publicly.  Sometimes we are going to have prayers that involve other people, and would require the sharing of secrets that are not ours to divulge.  Sometimes our prayers will involve matters that are delicate, which would become a root of gossip or disrupt our lives or the lives of others were they to be revealed.  Sometimes the need is embarrassing, and it would be better for all not to speak of it openly.  How, then, do we get prayer from others in these kinds of situations?

One option, of course, is to choose your prayer support more carefully.  The prayers of a close friend, a pastor or priest, someone you can trust to keep a secret, are as good as those of a crowd of strangers, and you can share your situation with these people in sufficient detail that they know what they are praying.

Another option is to consider what it is that you really need, and remove the lurid details from the request while still making the request:  “I am facing some difficult decisions and need wisdom.”  “I have to make some hard choices and need strength to do what I need to do.”  We can pray for you to have wisdom, strength, guidance, patience, endurance, joy, whatever it is that you actually need in the midst of whatever you’re not telling us.  You can return and tell us how it worked later, and again omit the details that aren’t relevant to our ability to give thanks for the answer.

If somehow you can’t do either of those things, then maybe you need to consider what it is that you’re asking, and whether it is something God wants for you.  Unspoken requests make sense when you’re asking for something good and right in the midst of something difficult and embarrassing, in which case you can skip the context and get to the request.  They make no sense when you’re asking us to agree in prayer with you for something we would immediately recognize is not something to ask of God.  That is probably not the case for most “unspoken” prayer requests–but how would we know?

So I will gladly pray for you (I’ve said as much previously, and given my conditions), but I want to know what I’m praying.