This is mark Joseph “young” blog entry #228, on the subject of Applying the Rules of Grammar.

This web log entry has little to do with my recent decision to collaborate on the next Multiverser novel (tentatively entitled Garden of Versers) and more to do with my dissatisfaction with a book I am currently reading that aims to teach aspiring writers to write better. 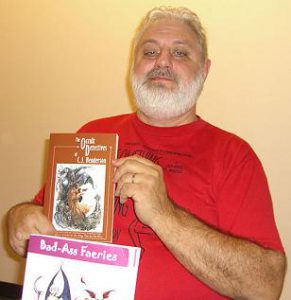 Some years back I was chatting with C. J. Henderson (pictured) at Ubercon, and he said that he didn’t really understand what a split infinitive was.  I explained, using what is perhaps the most famous example, and that example had a story attached.  It seems that when Patrick Stewart took the Star Trek role of Jean-Luc Picard he was bothered by the opening speech in which he was required to say, “to boldly go”.  That is a split infinitive–the infinitive being “to go”, and thus it ought to be “boldly to go” or “to go boldly”.  C. J. decided right then that he was never going to give any concern to splitting infinitives because, he said, he thought that one of the great speeches in modern writing.

Well, I still think that a bit hyperbolic, but I do see his point.  It is a strongly inspiring speech, and made stronger by the force of the split infinitive.  However, to some degree that force arises precisely because it breaks the rule–which brings me to one of the points I want to make.

When I was studying music theory, one of the first points Mr. Bednar made concerned the purpose of the course.  The first lesson to learn, he explained, was the rules, but then the second lesson was the reason for the rules.  Every rule in music theory exists because it prevents a typically undesired effect.  Once you understand the reason for the rules, you can decide intelligently when and how to break them to achieve that effect.  For example, in writing block harmony, the rule is to avoid parallel octaves, parallel fifths, and unsupported parallel fourths.  The reason for the rule is that the resonance between the notes in such parallels causes them to stand out against the other parts.  Thus you avoid such parallels when you want the harmony to blend evenly, but you choose to use these parallels when you want those parts to come to the fore:  you break the rule when, but only when, you are trying to achieve the result, and do so in ways that will effect the result only when it is wanted.

It is certainly possible in the course of writing to unintentionally or otherwise in attempting to fully and completely engage the reader split an infinitive or two–even to nest them as demonstrated in the first part of this sentence (to…to…engage…split).  However, although a brief interruption in the infinitive such as “to boldly go” can add force to the statement, a longer one such as just used here tends rather to be confusing.  That statement would have been easier to read as “It is certainly possible in the course of writing in attempting fully and completely to engage the reader unintentionally or otherwise to split an infinitive or two.”  (It is admittedly still a cumbersome sentence which could be significantly improved with more resequencing and a bit of trimming, but the point is still there.)  It is better to avoid them.

When I encounter a split infinitive in my reading, my mind usually attempts to repair it; it does the same when I encounter sentences ending with prepositions and a few other common mistakes.  (I refer the reader to my collected list of The Self-Breaking Rules of Grammar for a wonderfully illustrative set of mnemonics for some of these.)  However, I make a clear distinction in my writing, and particularly in my fiction.

Writings such as these web log posts, called “expository writing”, are supposed to be formal, and as such the rules of grammar should generally be followed.  An “intentional error” occasionally which creates impact is permitted, but it should be evident that saying it “wrong” is more effective than saying it “right”.  However, people don’t generally talk that way.  I often hear myself breaking the rules, particularly splitting infinitives and ending sentences with prepositions.  (It annoys me, and my mind sometimes goes back and attempts to edit what I said.)  Thus the rules are looser when writing fiction, and particularly when writing dialogue.  Fictional narrative is often in the voice of the character, or similarly approaching the voice of the character; dialogue is always in the character voice.  Thus my characters will split infinitives and end sentences with prepositions because they are supposed to come across as people, and that’s how people talk.  My narration almost never does so, unless I am trying to capture the impression of character thought and feeling (or I miss something in the editing process).

The rules exist partly for clarity.  Breaking them often creates narrative that is less easy to follow.  Some of the rules are what might be called grammatical formalities, artifact from previous centuries and source languages–someone has said that the reason we object to ending sentences with prepositions is that it is absolutely forbidden in Latin, although much of our usage is derived from German, where it is considerably more common.  The problem with doing this is it divorces the preposition from its object, and sometimes the object is omitted entirely, which makes the language less clear.  Yet native speakers provide the needed objects easily enough most of the time, and so native speakers omit them.

So the point is that you should understand the rules, figure out why they exist, what they prevent, and then learn to follow them most of the time, breaking them when doing so will achieve the kind of impact you want.  And remember:  the more frequently you break them, the less impact breaking them has.