Although I did a number of book reviews in the previous Blogless Lepolt web log a decade ago, I have done none in the mark Joseph “young” web log but one that was time travel related.  Part of that is because I write my book reviews at Goodreads, and have been reading enough lately that I did not want either to overload the web log with reviews or play favorites with inclusions and exclusions here.  However, this is a special case.

That requires full disclosure.  The author, T. M. Becker, is my first cousin once removed–my mother’s brother’s son’s daughter.  Yet I cannot say we know each other very well.  I can pronounce her given name (or at least, I believe I pronounce it correctly) but am not going to embarrass either of us by pretending I’m completely certain how it is spelled.  We have been in the same room three times in our lives, all at family gatherings (although with her nine children I imagine it always seems she is at a family gathering), the first when she was perhaps five years old, plus or minus a couple years, and the other two within the past couple years.  I did not immediately recognize her when she came up to me at that last one.  She connected with me via social media shortly before this book was published, and I offered to write a review in exchange for a copy.

That is the kind of offer a writer immediately regrets, as the fear arises that you won’t be able to say anything good about it and don’t want to damage a relationship by saying something bad.  Fortunately, that is not a problem in this instance.  Thus I offer 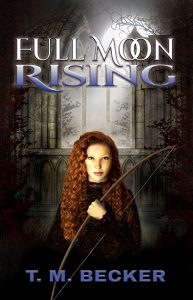 I have high praise for Becker’s first published novel.  It is excellent in many ways.

Let’s begin with the little stuff.  I read a lot of books in which I cringe at editing mistakes, typos, grammatical errors, spelling errors, misused words, punctuation problems, and the like.  Here the editing was immaculate.  I think there were perhaps two sentences in the entire book which I thought I might phrase differently, one place where I had to pause and figure out who made one statement in a three-way conversation.  There is no editor credit other than thanks to a writer’s workshop group; I am guessing that it is her own linguistic skill that is responsible for this.

She somewhere has acknowledged the influences of J. R. R. Tolkien and J. K. Rowling, and her story fits comfortably between Hobbits and Hogwarts but never blatantly borrows anything significant from either.  She demonstrates familiarity with subject matter, such as proper medieval architectural terms, common medicinal herbs, fashion and textiles and jewelry, and equestrian matters.  It at least feels as if she knows what she’s describing.  Her characters and creatures and settings while familiar are all original, or at least sufficiently distinct from any I have encountered elsewhere to say I don’t feel as if they were borrowed.

I struggle with titles.  I’m not sure that this book is well named, as the rising of the moon while significant in the main character’s life was less prominent in the story.  However, I would be hard-pressed to find a better title, and titles after all are essentially handles by which to identify stories.

The story revolves around Arabella.  It took me a while to learn her name, because it is written in the first person (and on this, kudos to Becker for never noticeably breaking perspective) and her name is rarely spoken–but I admit I often have problems with names of people, whether fictional or real.  There are quite a few conflicts and mysteries surrounding her, such as the disappearance of her mother, the oppressive regime that has conquered her country, the strange dreams she has when the moon approaches full, the magical trunk in her bedroom, the nature of the horse she rescues, and the threat of the evil wizard.  Some of these are not resolved within the book, and some are resolved too easily, such as the downfall of the oppressive regime after Arabella has fled the country.  However, the book is not about those stories.  It is very much about Arabella’s self-perception, the person she sees when she looks in the mirror and why she does not believe when others tell her she is beautiful.  It is a good story, and perhaps very meaningful for the target young adult audience; I recognized what was happening before the reveal, but I think we were supposed to be wondering why everyone saw her as beautiful but herself, and Becker accomplishes this layered into a story laced with adventure and excitement.

If I have a disappointment, it’s that I don’t know what Becker will write next.  Arabella has lived through her teen years and is about to marry her prince (unclear in the epilogue whether the wedding had occurred, but if not it is imminent); she would not be a suitable central character for the next book unless the villain kidnaps her before the wedding.  Speaking of the villain, we think he is dead, but he might have survived, but continuing Arabella’s story beyond a few weeks would not fit the target audience of the first book.  There is much that could be explored in this world, but difficult to set so good a plot to it as the one about Arabella in this book.  I fear my curiosities about the other fortresses, the secrets of Aramis, and so many other questions about what is just beyond what we were told will go unanswered.

Yet perhaps that is as it should be.  There is room in her world for another story, and room on the shelves should she decide to create another world.

I am giving the book five stars on Goodreads.  I think it one of the best books I have read in several years.