This is mark Joseph “young” blog entry #220, on the subject of The Right to Repair.

When I was considerably younger, I did a small amount of electronics troubleshooting and repair.  My father was an electronics engineer who encouraged and assisted this, and my focus was primarily on audio equipment used by my band.  Back then you could buy components through RadioShack® and its sister catalog company Allied Electronics®, and through Lafeyette Electronics® and probably several other outlets.  Sometimes we ordered replacement parts directly from manufacturers, among whom Ampeg® deserves special mention for its support. 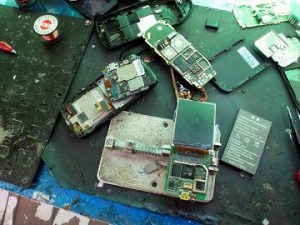 Nowadays modern electronics have gotten away from me.  I’ve got a rough understanding of transistors, and read an early book explaining integrated circuts, but microminiaturization is too difficult for my weak eyes and clumsy hands, and “negative feedback bass boost” and “RCL circuit” are more vague concepts in the back of my mind than real knowledge.  I have enough trouble wiring footswitches and jacks for my own home-designed equipment.  Computers and cellular phones are beyond me, and I almost always take them to professionals for work.  However, I usually take them to local professionals, not manufacturer repair services.  They’re cheaper, and I tend more to trust that they’re not going to try to sell me something I don’t need.

The problem faced by many of these repair services is that some manufacturers (the list starts with “A”) won’t provide what they need to make repairs–information such as schematics and programming data, parts, repair instructions.  Home handymen like me can’t get these, either.  The manufacturer doesn’t want you to be able to repair your device.  It wants you to have to pay it inflated rates to repair it, or replace it with a new device it is ready to sell you.  Thus for even so simple a problem as a cracked screen, the company is not going to sell you a replacement screen nor provide you the installation instructions for it.  You either buy a new device or pay them to fix the old one.

The State of New Jersey thinks this shouldn’t be permitted.  The legislature is reportedly considering a bill, the Fair Repair Act, which will require manufacturers to make parts and information available for independent and home repairs of electronic devices.  As one who has benefited from the availability of such technology in the past, and who utilizes the services of independent repair outlets, I much favor this bill, and encourage you to support it if you live in New Jersey.

Even if you don’t, this will be significant.  If companies are required to make this kind of support available in New Jersey, with today’s international market it effectively becomes available worldwide.  It will also be a boost to small businesses, as it becomes possible for them to repair electronic devices previously clouded behind company secrets.

It won’t be a complete revelation of everything.  Manufacturers will try to stop the bill, claiming that it will require them to reveal trade secrets.  However, New Jersey has a legislatively defined meaning of “trade secret”, and anything that falls within its parameters will be protected under the law.  What won’t be protected is the arbitrary creation of monopolies on repairs and replacement parts for cell phones and similar consumer electronics, and it’s past time to do it.