This is mark Joseph “young” blog entry #206, on the subject of Temporal Thoughts on Colkatay Columbus.

I realized that the premise of this movie was absurd enough that it was probably not going to be a serious time travel film.  Found on Netflix, the blurb simply said that Christopher Columbus arrives in Kolkata, India in the present, where two young men seek his advice in their own searches for success.

What was not evident, though, was that the movie itself was not intended to be absurd nor even comedic, and it might not involve time travel at all.  It is an Indian movie, viewed with subtitles. 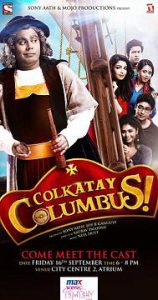 Apart from the intrepid explorer himself, who plays a significant role in the story, our primary characters are called Sam and Ray.

Sam has a longer more ethnic name, but he shortened it and cut all ties with his family eight years before the story opens.  He is reasonably successful as a radio disk jockey (an “RJ” in the parlance of the film), but wants to be a musical recording artist.  To this end, he has begun dating an entirely self-absorbed girl solely because her father is wealthy enough to finance the production of an album for him–despite the fact that he has a very close relationship with a girl who adores him.

Ray is a corporate office worker who writes short stories in what little spare time he has, and wants to succeed as a writer, but with mixed objectives he also wants a promotion up the corporate ladder.  His complication is that he is clearly attracted to a girl who is his superior, perhaps supervisor, in the company, and she to him, but although he would like to pursue a relationship he is too concerned about persuading her to pull some strings to get him promoted.

One day the two young men are riding in the back seat of a car driven by one of their friends when they almost hit a man, maybe sixty or so from appearance, dressed in Italian Renaissance clothing.  They are curious and engage him in conversation, and he claims to be Christopher Columbus, the discoverer of America, or at least of quite a few islands off its coast.  Then when he swoons (and hey, wearing all that heavy warm clothing in India, it’s surprising he lasted as long as he did) they catch him, bundle him into their car, and then debate whether to take him to a hospital or take him to their home to see if he can help them find success.

That is certainly the theme of the film, that everyone is exploring, searching for something.  Columbus believes himself to be the greatest explorer, and wants to help people find what they seek, so he becomes involved in advising the boys on reaching their goals.  It is genuinely interesting, if you aren’t stymied by the slow pace, but it is not the point of our investigation.

When the film is rising to its climax the first of those is knocked out of consideration, as fifteenth century Portuguese explorer Bartholomew Diaz (first man to navigate around the southern tip of Africa to reach India by water) shows up at the apartment looking for Columbus, saying that the latter gave him the address and asked him to bring a hammock so he could sleep better.  It appears that they are genuinely who they claim to be, despite the weak explanations for their fluency in the local language and somewhat native appearance.

However, Diaz explains that he has been living in South Africa in recent years, along with Gandhi, and that suggests that they are not time travelers at all.  They simply are the continuations of their original selves from years before, still alive after their deaths.

That may be the significance here.  In the closing scene, two other young men are asked for help by someone in a military uniform who claims his motorcycle broke down and gives his name as Che Guevara.  In some way, these famous people are still around.

There might be a clue to the author’s intent in the fact that a couple times characters engage in tossing quotations from famous people at each other.  One even comments that if you become famous, silly little things you said become famous quotes.  There is thus a sense in which those famous people are still with us, still influencing us, still in some sense alive in our midst, having a sort of immortality that is manifest within the movie by their corporeal presence.

I had some concern that at some point Columbus might return to the past.  Indeed, there is pressure on him to “go back”.  However, he only returns to his ship, and we can reasonably conclude that he does not travel through time in any way different from the rest of us, he only has continued to do so for five centuries beyond when we thought he died.

So despite the notion of Christopher Columbus appearing in the early twenty-first century, there is no time travel in this one.

I appear to have access to copies of Paradox, Synchronicity, The Man from the Future, and Abby Sen, all of which have strong claims to containing time travel elements.  Watch for posts, either here on the web log or as full page analyses in the Temporal Anomalies in Time Travel Movies section of the site.